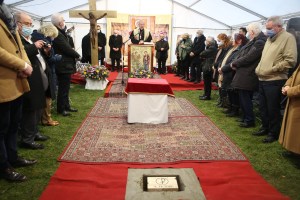 On Saturday 12 February last, Archbishop Eamon Martin presided over the ceremony of laying the foundation stone for the extension works of the Redemptoris Mater Seminary in De La Salle Terrace, Dundalk, Co Louthin the Archdiocese of Armagh.  The seminary was established in 2012 for the purpose of forming priests who are specifically trained for the challenges of the New Evangelization.

The present seminary had been renovated and officially opened in November 2016, however, with the sustained growth of vocations, there is an urgent need to extend the existing building.  The laying of the foundation stone marked the opening of the new construction site.  In line with the growth of vocations in the seminary in recent years, the new 1,400 square metre extension will provide additional bedrooms, increased dining and living areas as well as a beautiful new oratory on the north side of the site.  It is expected that the project works will be completed by the end of 2023.

At the ceremony Archbishop Eamon said, “Ireland has had a tremendous missionary outreach down through the centuries, so one of the ingredients of the Redemptoris Mater Seminary, that is so important for me, is this missionary dimension.  It is really a seminary for the New Evangelisation.  I am hopeful that our young men who are being formed here in Dundalk will be able to bring that missionary spirit into their priesthood within the Archdiocese and beyond.  We have been very blessed that so many people have supported this seminary by their prayers and by their contributions over the years.  By laying this foundation stone today, we are placing the continuation of this work in God’s hands.  We pray that He may bless all those working on this project and that this seminary may bear much fruit for the formation of future priests and for the spreading of the Gospel.”

Also in attendance at the ceremony were Cardinal Seán Brady, Archbishop Emeritus of Armagh; Bishop Michael Router, Auxiliary Bishop of the Archdiocese of Armagh; priests of the Archdiocese; representatives of Religious Communities; friends and benefactors of the seminary; local residents; representatives of the local Council; the team responsible for the Neocatechumenal Way in Ireland; and, members of the Neocatechumenal communities and the members of the Family of Nazareth Foundation charity who are conducting fundraising activities to support the work.  The seminary functions largely due to donations from individuals. Those wishing to donate can find details on their website www.redmatarmagh.org/help-us

So far three priests and a deacon have been ordained from the seminary and they are now serving in parishes of the Archdiocese.  At this time eighteen young men from six countries (Croatia, Italy, Malta, Poland, Scotland, Spain and USA), whose vocations are nurtured by the Neocatechumenal Way, are being formed to become priests for the future.  These seminarians, once ordained priests of the Archdiocese of Armagh, will also be available to offer their lives for the mission, in Ireland or abroad.

The marble foundation stone laid by Archbishop Eamon was blessed by Pope Francis in August 2018 during his visit to Ireland to attend the IX World Meeting of Families. The stone is engraved with a symbol of Jesus Christ.  The ceremonial laying of this foundation stone is a sign of the project being entrusted to God as well as being a symbol of Christ himself, who is the cornerstone of our faith and the rock of our salvation.