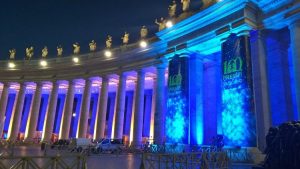 For the fourth year running, the Vatican is hosting the ‘100 Nativity Scenes’  International Exhibition (Mostra dei 100 Presepi), bringing together over 100 cribs from across the world depicting the Nativity of the Lord.

The exhibition, which has become a traditional feature in the Christmas calendar of events in Rome, is being held under the colonnade of St Peter’s Square, from 5 December 2021 until 9 January 2022. As in the 2020 edition, the popular exhibition has been moved outdoors due to the COVID-19 pandemic.

The exhibition was inaugurated on Sunday5 December by Archbishop Rino Fisichella,  President of the Pontifical Council for the Promotion of the New Evangelization.

The 126 cribs exhibited this year come from a number of European countries such as Italy, Germany, Hungary, Slovenia, Slovakia and Croatia, and from other parts of the world, including Kazakhstan, Peru, Indonesia, Uruguay, Colombia and the United States.  Also, crèches from several Roman parishes and some 30 schools in the Latium region will be exhibited.

Materials used to make the cribs range from paper, fabric, cork and wood to less common materials. Participants this year include the chocolate company Il Cioccolato dei Trappisti (The Trappist Chocolate) who will exhibit a nativity scene made of chocolate and weighing 100 kg.

100 Presepi was established in Rome in 1976 and originally took place in the city’s central Piazza del Popolo. In 2018, it moved to the Vatican and is now organized by the Vatican’s Pontifical Council for the Promotion of the New Evangelisation.