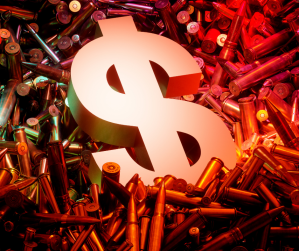 As one of the world’s largest arms fairs prepares to kick off in London, the Catholic Bishops of England and Wales and of Scotland, together with a host of faith-based and Justice and Peace organizations, have voiced their opposition to the arms trade, echoing Pope Francis’ appeal for an end to the lucrative but lethal commerce.

In a statement, the Bishops from across the UK and their partners recall Pope Francis’ appeal emphasizing how conflicts fueled by the trade “harm the world’s poorest communities, force people to flee their homes as refugees, and have devastating consequences for our environment.”

Quoting from his discourse to the US Congress in September 2015, the signatories of the statement say “Why are deadly weapons being sold to those who plan to inflict untold suffering on individuals and society? Sadly, the answer, as we all know, is simply for money: money that is drenched in blood, often innocent blood. In the face of this shameful and culpable silence, it is our duty to confront the problem and to stop the arms trade.”

The DSEI arms fair scheduled to take place in London from 14 to 17 September, brings together governments and military delegations from across the world with more than 1,500 companies selling guns, bombs, and other weaponry.

In their statement, the signatories also say they recognize the right of every country to defend itself against attack but, they add “we must never ignore, or allow ourselves to become complicit in, the destruction of human life and violations of human dignity made possible by the sale of weaponry.”

Finally, the Bishops and representatives of Pax Christi, CAFOD, SCIAF, and the National Justice and Peace network express their solidarity with all those people of goodwill who are peacefully campaigning against the arms trade and “join in prayer with the Holy Father that our leaders may commit themselves to end it, in pursuit of peace and care for our whole human family.”

According to figures drawn up by the Statista Research Department, global defense spending increased between 2017 and 2020, with the largest contributor to the vast sums of money spent on defense and arms each year being the United States military. A report by the organization also shows that in 2020 the US spent about $778 billion, more than triple that of China in second place.