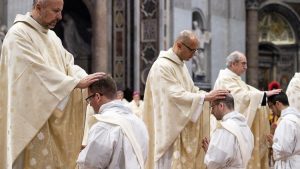 A Theological Symposium entitled “Toward a fundamental theology of priesthood” aims to explore a host of issues including vocations to the priesthood, improving the way laypeople and priests work together, the mission of service, and priestly celibacy, to name just a few has been organised by the Congregation for Bishops at the Vatican from 17-19 February 2022.

The Prefect of the Congregation for Bishops and the chief organizer of the Symposium, Canadian Cardinal Marc Ouellet, gave Vatican Radio’s Christopher Wells an overview of the fundamental questions and themes participants at the Symposium will be addressing.

Basically, Cardinal Ouellet explains, the event is concerned with a “Fundamental Theology of the Priesthood”, meaning that we start with Baptism.

The Prefect of the Congregation for Bishops said the event includes interventions and discussions on the relationship between the fundamental priesthood of the baptised and the ministerial priesthood.

He said the main focus is based on research that has been developed in the context of a synodal Church: “so we look for an understanding of the complementarity between the state of life and the communion of vocations in the Church.”

Acknowledging the fact that the question of celibacy and priestly celibacy in the Latin Church is one that many people are very interested in, Cardinal Ouellet said the Symposium features one specific conference on priestly celibacy within the context of the overall theme of the priesthood founded on baptism.

That conference, he explained, will explore the story of celibacy in the Church, and the place of celibacy in the Latin Church. And, he added, the fact a specific address is dedicated to this theme doesn’t mean it will not be addressed by others.

“It will be certainly be touched in the context of today’s problematic of the priesthood and of celibacy, and how priests are living out celibacy,” he said, however, the scope of the Symposium is not “to decide whether we will keep obligatory celibacy or not.”