Saint Irenaeus to become Doctor of the Church 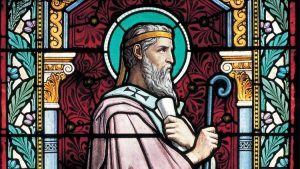 Pope Francis has authorised the conferral of the title Doctor of the Church on Saint Irenaeus, and the promulgation of three Decrees concerning the Heroic Virtues of three people on the path to canonization.

Pope Francis recently received in audience Cardinal Marcello Semeraro, Prefect of the Vatican Congregation for the Causes of Saints, and authorised him, in accordance with the opinion of the Plenary Session of the cardinals and bishops who are members of the same Dicastery, to confer the title of Doctor of the Universal Church on Saint Irenaeus.

St. Irenaeus soon to be declared a Doctor of the Church

The Pope had already announced this intention during an audience with members of the St. Irenaeus Orthodox-Catholic Joint Working Group in the Vatican last October.

On that occasion, he described Saint Irenaeus, (who, though born in Smyrna, in what is now Turkey, between 130 – 140 AD, later moved to France where he served as Bishop of Lyons) as “a great spiritual and theological bridge between Eastern and Western Christians.”

During the same Audience on Thursday 20 January, the Pope authorised the Congregation to promulgate Decrees concerning:

– the heroic virtues of the Servant of God Francesco Saverio Toppi, Archbishop Prelate of Pompei, and member of the Order of Friars Minor Capuchin. He was born in 1925 in Brusciano (Italy) and died in 2007 in Nola (Italy);

– the heroic virtues of the Servant of God Maria Teresa DeVincenti, founder of the Congregation of the Little Workers of the Sacred Hearts; born in 1872 in Acri (Italy) and died there in 1936;

– the heroic virtues of the Servant of God Gabriella Borgarino, of the Society of the Daughters of Charity, born in 1880 in Boves (Italy) and died in 1949 in Luserna (Italy).

The recognition of heroic virtues on the part of the Church represents the first step toward canonization. The person who has practiced heroic virtue is declared “Venerable,” and is called a Servant of God.