Pope’s World Day of the Sick message: Nearness, charity for those who suffer 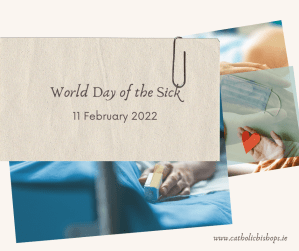 “Be merciful, even as your Father is merciful” (Lk 6:36): Standing beside those who suffer on a path of charity.”

The Pope noted that this year’s occurrence marks 30 years since Pope St. John Paul II instituted the World Day to encourage all members of the Church to “be increasingly attentive to the sick and to those who care for them.”

He also expressed his gratitude for the great advances in healthcare and pastoral care of the sick in the intervening three decades, while recalling that many people still live in areas that are poorly served by healthcare systems and pastoral outreach.

He noted that the annual celebration of the World Day of the Sick is taking place in Saint Peter’s Basilica, rather than in Arequipa, Peru, as originally planned, due to the ongoing health crisis.

Pope Francis’ message comes a few short months after his own brief hospital stay at Rome’s Gemelli Hospital following a scheduled surgery on his colon.

In his message, Pope Francis reflected on various aspects of “mercy,” starting with the mercy of the Father.

He said God’s mercy is part of His very nature and combines “strength and tenderness.”

“God cares for us with the strength of a father and the tenderness of a mother. He unceasingly desires to give us new life in the Holy Spirit.”

‘Jesus, the mercy of the Father’

The Pope said that Jesus offers the best witness to the Father’s merciful love for the sick.

In His earthly life, Jesus healed all manner of disease and illness, and made it an important part of His missionary mandate to the apostles, who were sent to “proclaim the Gospel and to heal the sick.”

Pope Francis drew on a consideration by French philosopher Emmanuel Levinas to explore why ministering to the sick is such an important part of the Christian mission.

“Pain isolates in an absolute way,” said Mr. Levinas, “and absolute isolation gives rise to the need to appeal to the other, to call out to the other.”

The Pope said acute experiences of our human frailty urge us to seek out those near to us, and it is the Church’s job to respond with concrete signs of God’s charity.

“When individuals experience frailty and suffering in their own flesh as a result of illness, their hearts become heavy, fear spreads, uncertainties multiply, and questions about the meaning of what is happening in their lives become all the more urgent.”

‘To touch the suffering flesh of Christ’

Pope Francis went on to consider the many healthcare workers who daily minister to “the suffering flesh of Christ.”

He thanked all healthcare professionals and volunteers for dedicating their lives to helping those who suffer.

“Dear healthcare workers, your service alongside the sick, carried out with love and competence, transcends the bounds of your profession and becomes a mission. Your hands, which touch the suffering flesh of Christ, can be a sign of the merciful hands of the Father. Be mindful of the great dignity of your profession, as well as the responsibility that it entails.”

At the same time, the Pope praised the technological and therapeutic advances made in the field of medicine.

Yet no advancement, he added, can allow us to “forget the uniqueness of each patient, his or her dignity and frailties.” Patients, he said, “are always more important than their diseases.”

‘Centres of care as “houses of mercy”’

The Pope said the World Day of the Sick allows the Church to take stock of her long-running dedication to providing healthcare to the poor and marginalized by opening hospitals and clinics in poverty-stricken areas.

He reaffirmed the work of Catholic healthcare institutions, calling them “a precious treasure to be protected and preserved” since they offer “the gift of charity”.

“At a time in which the culture of waste is widespread and life is not always acknowledged as worthy of being welcomed and lived, these structures, like ‘houses of mercy’, can be exemplary in protecting and caring for all life, even the most fragile, from its beginning until its natural end.”

Pope Francis then expressed his appreciation for those who carry out pastoral care among the sick.

Those who act on Christ’s invitation include professionals like hospital chaplains, as well as ordinary Catholics who take the time to visit their ailing neighbors.

“If the worst discrimination suffered by the poor – including the sick, who are poor in health – is the lack of spiritual attention, we cannot fail to offer them God’s closeness, His blessing, and His word, as well as the celebration of the sacraments and the opportunity for a journey of growth and maturation in faith.”

United to Christ in our suffering

The Pope wrapped up his message for the 30th World Day of the Sick by entrusting all the sick and their families to the intercession of Mary, Health of the infirm.

“United with Christ, who bears the pain of the world, may they find meaning, consolation and trust,” he concluded. “I pray for healthcare workers everywhere, that, rich in mercy, they may offer patients, together with suitable care, their fraternal closeness.”

Click here to read the Holy Father’s Message in full.