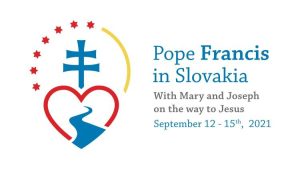 The itinerary for Pope Francis’ Apostolic Visit to Budapest and Slovakia has been released. His journey will take place from the 12-15 September 2021.

On Sunday 12 September Pope Francis will depart from Rome’s Fiumicino International Airport arriving at Budapest International Airport at 7.45 am. Following an official welcome, the Pope will meet with the country’s bishops and meet with representatives of the Ecumenical Council of Churches and Jewish communities. In the afternoon the Pope will preside over Holy Mass for the closing of the 52nd International Eucharistic Congress before departing for Bratislava, Slovakia.

Highlights of the Pope’s first full day in Slovakia on Monday 13 September, will include a courtesy visit to the President of the Republic, as well as meetings with political leaders and an encounter with Bishops, Priests and Religious.

On the morning of Tuesday 14 September, Pope Francis will depart for Košice where he will preside over the Divine Liturgy of Saint John Chrysostom. Later in the day, he will meet with the Roma community and with young people before flying back to Bratislava.

On the final day of his visit to Slovakia, Pope Francis will preside over Holy Mass at the National Shrine in Šaštin. Following a farewell ceremony, the Pope will depart for Rome at 15.30 in the afternoon of Wednesday 15 September.

The logo for the Apostolic Visit 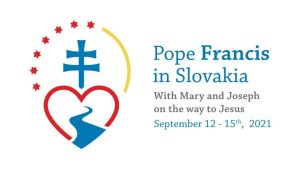 The logo picks up on the theme of the visitation: at the bottom is a road, symbolising the way to the cross, inside a heart, a reminder of St Joseph’s love for Jesus and of Our Lady, patron saint of Slovakia. The seven stars are a reference to the “Seven Sorrows” of the name given to the Virgin Mary. The elements of the logo bear the colours white, blue and red of the Slovak flag and white and yellow of the Vatican flag.

Please find the full itinerary below:

08:10 Departure by airplane for Košice
09:00 Arrival at Košice Airport
10:30 BYZANTINE DIVINE LITURGY OF SAINT JOHN CHRYSOSTOM PRESIDED BY THE HOLY FATHER in the square of the Mestská športová hala in Prešov
16:00 MEETING WITH THE ROMA COMMUNITY at Luník IX district in Košice
17:00 MEETING WITH YOUNG PEOPLE at Lokomotiva Stadium in Košice
18:30 Departure by airplane for Bratislava
19:30 Arrival at Bratislava International Airport
Wednesday 15 September 2021