Pope John Paul I on the road to sainthood 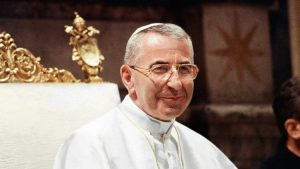 On Wednesday 13 October, Pope Francis received in audience Cardinal Marcello Semeraro, the Prefect of the Congregation for the Causes of Saints, and authorized his dicastery to promulgate the decree recognising a miracle attributed to the intercession of Albino Luciani or Pope John Paul I.

The Congregation’s website says it is about the healing of an eleven-year-old girl at the end of her life with “severe acute inflammatory encephalopathy, a malignant refractory epileptic illness and septic shock”.  Her situation was very serious, characterized by numerous daily seizures and a septic state of bronchopneumonia. The initiative to invoke the Pope had been taken by the parish priest of the parish under whose jurisdiction was the hospital.

So for Pope John Paul I, who hailed from the northern Italian region of Veneto, the way to beatification has been cleared and Pope Francis will decide upon a date for the ceremony.

Born on October 17, 1912 in Forno di Canale (today Canale d’Agordo), in the province of Belluno, and died on September 28, 1978 in the Vatican, Albino Luciani was Pope for only 34 days, one of the shortest pontificates in history.

He was ordained priest in 1935 and in 1958, immediately after the election of John XXIII, who as the Patriarch of Venice knew the him, was appointed bishop of Vittorio Veneto. Luciani participated in the entire Second Vatican Council and applied its directives with enthusiasm.

He chose the word “humilitas” [humility] for his episcopal coat of arms, and was a pastor who lived soberly, firm in what was essential in the faith, open from the social point of view, close to the poor and the workers. He was rigid when it came to the unscrupulous use of money to the detriment of the people, as was demonstrated by his firmness on the occasion of an economic scandal in Vittorio Veneto involving one of his priests.  In his magisterium, he particularly insisted on the theme of mercy.

A great communicator, he wrote an acclaimed book entitled “Illustrissimi”, which contains letters he wrote to the great personalities of the past with judgments on the present. For him, catechesis was of particular importance and the need for those who transmit the contents of the faith to be understood by all.

He was the son of a socialist worker who had worked for a long time as an emigrant in Switzerland.  In a letter written to Luciani granting him permission to enter the seminary, his father wrote: “I hope that when you become a priest, you will be on the side of the poor, because Christ was on their side” – words that Luciani would put into practice all his life.