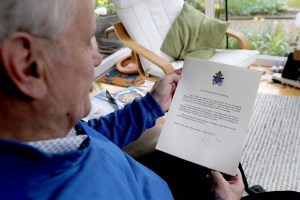 Pope Francis has written a personal letter of thanks to former Presbyterian Moderator Norman Hamilton after reading an article on the Holy Father’s Encyclical Letter Fratelli Tutti which was published in The Irish News.

The unique papal seal of approval comes after Dr Hamilton wrote about the Pope’s latest encyclical in the paper’s Faith Matters section. 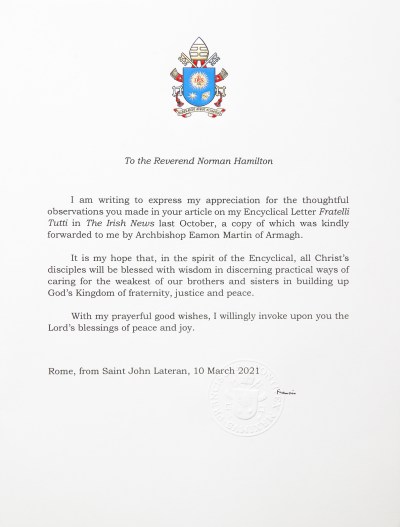 “I am writing to express my appreciation for the thoughtful observations you made in your article on my Encyclical Letter Fratelli Tutti in The Irish News,” the pontiff wrote to Dr Hamilton.

The encyclical focuses on ideas of reconciliation and friendship, with a vision for building a better world for all people.

“It is my hope that, in the spirit of the Encyclical, all Christ’s disciples will be blessed with wisdom in discerning practical ways of caring for the weakest of our brothers and sisters in building up God’s Kingdom of fraternity, justice and peace,” wrote the Pope.

The Pope’s attention was drawn to Dr Hamilton’s Irish News article by Archbishop of Armagh Eamon Martin who described the assessment of a papal encyclical by a Presbyterian cleric as “perhaps unprecedented in the context of Northern Ireland and its history”.

Dr Hamilton said he found it hard “to find the words that encapsulate the surprise and delight” at the Pope’s personal response to his observations on Fratelli Tutti.

“I am chuffed that what you write on your computer in Ballymena ends up getting thought of as worthwhile to get sent to a world religious leader, who then responds,” he said.

Dr Hamilton said he was highly appreciative that Archbishop Martin had taken the time to forward the article to the Pope.

His assessment of the papal encyclical – not traditionally an area Irish Presbyterian clergy are given to exploring – was offered in the spirit of reaching out, he said.

“It is important for us to engage in discussion that actually helps understanding and tries to get somewhere,” said Dr Hamilton.

“My comments on Fratelli Tutti were aimed at helping the Church generally to find ways of reaching the Pope’s vision of a more peaceful and just world, albeit we live in a broken and fractured world.”

Archbishop Martin, whose own commentary on the encyclical was also featured, forwarded a copy of the senior Presbyterian cleric’s “significant intervention” to the Vatican via the papal nuncio to Ireland, Archbishop Jude Thaddeus Okolo.

Drawing the article to the Pope’s attention, Archbishop Martin said: “I also think the Holy Father would be extremely pleased to know that a minister of the Presbyterian Church is open to giving his views on the Holy Father’s encyclical in a newspaper that is widely read by those of the Catholic faith.

“From an ecumenical point of view, this initiative is to be welcomed and applauded. Anything that brings the communities together here is commendable and truly in the spirit of Fratelli Tutti.”

Archbishop Martin congratulated The Irish News for its coverage and said he was very pleased that the Pope had written to Dr Hamilton. “Pope Francis saw in Norman Hamilton’s intervention precisely the kind of spirit he was trying to promote in Fratelli Tutti,” he said.

The Pope and Dr Hamilton had “met through this writing”, he added: “I would hope that this illustration of Pope Francis’s kindness and generosity of spirit, together with Norman’s, will inspire more people to read the encyclical.”