Pope Francis’ World Day of Peace message is good advice for us in Derry as we will soon recall the 50th anniversary of Bloody Sunday. – Bishop Donal McKeown 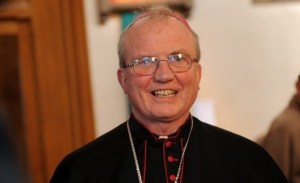 In his homily at Mass on New Year’s in Saint Eugene’s Cathedral, Derry, Bishop Donal McKeown of Derry,  reflected on some of the themes in this year’s message from Pope Francis for the World Day of Prayer for Peace on 1 January.

Bishop McKeown said, “Today there will be much talk about New Year resolutions – and after the pressure to consume over Christmas, we will be bombarded by ads for diets, exercise regimes, summer holidays and sales.  But on this octave of the Prince of Peace’s birth in Bethlehem, Pope Francis asks us to look at some concrete areas in 2022.

“The last two years of the Covid emergency have left us amazed at the level of solidarity in society and frightened by the rising tide of anger and confrontation.  The health service has been praised for its dedicated work.  At the same time, we are bombarded by new dogmatic certainties about worldwide conspiracies or the alleged egotistical stupidity of those who decide not to be vaccinated.  A frightened world is fertile ground for those who nourish political confrontation.  And simplistic narratives about failures in earlier times offer a black and white analysis of our chequered past and bland promises of a bright utopian future.”

Bishop McKeown went on to say, “Firstly, in the midst of this battle between solidarity and fragmentation, Pope Francis calls for dialogue between generations.  This goes beyond maximising the usefulness of older people or feeling obligated to help them in their later years.  It involved battling against the commercial pressures that have divided people into niche markets to be exploited for their spending powers.  It means listening to the memories of the old and the dreams of the young. A culture of instant gratification destroys our need to develop strong roots in the past so that we can face the future with hope.  A rootless culture may suit the strong, but it does not nourish young idealists.

“There are many divisive forces at work who seek to promote a future that suits them.  The financial giants promise pleasure through their products.  And the politically strong will try to discredit everybody else and promote their ideological purity.  As happened in Jesus’ time, the Gospel often turns out to be a countercultural message that the new dogmatists want to ban from the public forum and from any role in influencing a young generation.  The ‘obey your thirst’ message has no room for self-control and self-sacrifice for the good of others.  Dialogue alone can build communities of hope.

“Secondly, the Gospel of Peace points to many liberating if uncomfortable truths.  Right from the Garden of Eden story, it is clear that freedom to choose without some moral framework promotes victory for the strong over the weak.  An emphasis on human rights on their own suits the profit margins but not those on the margins.  A society that detaches rights from any notion of right and wrong is destroying any hope of social cohesion.  The privatisation of rituals unhooks individuals from key compass points and leaves them open to exploitation by powerful forces.  The high priests and priestesses of the new so-called age of reason condemn those who disagree with them with a level of arrogance and scorn that characterise old and new elites.  They tend to disdain faith in Jesus as something for the hopeless and the hypocrites.  This is the space into which Pope Francis asks us to be in dialogue if we want to build and not merely smash old certainties on the anvil of frail new dogmas.”

Bishop McKeown continued, “Thirdly, as well as the nourishing dialogue between generations, Pope Francis addresses the world of education and of work.  He contrasts the expenditure that goes on destructive armaments with what is dedicated to forming young people to construct their world.  On my way into one of our Christmas Eve Masses, I met a lady and wished her a happy Christmas.  She told me it had been a bad year because she had buried a son and a grandson, both victims of substance abuse.  But her faith was still important in helping her cope.  We are losing a huge number of our young people to alcohol and drugs – but that, since most of them are not terribly important and aren’t influential, they are merely dispensable collateral damage as long as the lucrative self-indulgence train keeps running.  Our failure as a society to prepare so many young people for the world of work and responsibility is a blight on all of us as we face 2022.  I read recently that the health authorities in Dublin might move to make the State tobacco free.  That may be laudable in some ways.  But there are many other pernicious values that poison the bodies and hopes of young people.  Loneliness, despair and poverty of aspiration crush too many individuals and scar their families. Parents have often tried their best but face a tsunami of hollow cultural messages about what makes life meaningful.

“Pope Francis promotes the hope that heroic young people will rise to the challenge and offer a different vision, based on generosity and the energy that comes from belief in the transcendent.

“Each time of crisis has given birth to young people who see the shallowness of their cultural nourishment and rebel against what has become obvious to them.  They tackle what is obvious but which many of their contemporaries are too frightened to name.  They know the silent despair that many young people live with in the midst of all the silly jingles. They know the predatory element of the society in which they seek to grow.  They know that they will be mocked by many unless they stand for nothing and fall for anything.”

Concluding his homily, Bishop Mc Keown addressed the upcoming 50th anniversary of Bloody Sunday, saying, “Pope Francis on World Day of Peace encourages us that – “we can be firmly rooted in the present, and from here, revisit the past and look to the future. To revisit the past in order to learn from history and heal old wounds that at times still trouble us. To look to the future in order to nourish our enthusiasm, cause dreams to emerge, awaken prophecies and enable hope to blossom. Together, we can learn from one another.”

“This is good advice for us all as, in this city of Derry, we will soon recall the 50th anniversary of Bloody Sunday.  Fighting the battles of the past, we learn little.  Being trapped in the past and its pain, we grow little.  Peace will grow from dialogue between experience and hope.  And that is what we do each day around the altar where we remember the pain of Calvary as the source of new life.  With the power of Emmanuel, God with us, we can face whatever challenges 2022 bring.”