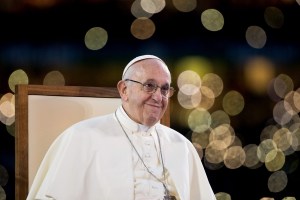 During Mass celebrated in St Peter’s Basilica on Sunday, on the occasion of the diocesan World Youth Day and the Solemnity of Christ the King, Pope Francis Pope invited young people to “stand upright while everything is falling apart”, to be courageous in going “against the tide”, “without shortcuts, without falsehood”.
Taking his cue from the day’s readings, Pope Francis noted that in the Revelation of Saint John and foreshadowed by the prophet Daniel in the first reading, are the words, “He is coming with the clouds.”

The second image is that of the Gospel: Christ who stands before Pilate and tells him: “I am a king”.

Reflecting on these two phrases, the Pope began by encouraging young people to “stop and think about these two images of Jesus, as they journey towards the 2023 World Youth Day in Lisbon.

The Pope noted that the first image: Jesus who comes with the clouds, evokes Christ’s coming in glory at the end of time. “It makes us realize” said Pope Francis “that the final word on our life will belong to Jesus.”

“He comes ‘with the clouds’ to reassure us,’” said the Pope.  “As if to say: ‘I will not leave you alone when storms gather over your life.  I am always with you.  I come to bring back the bright sky.’”

The prophet Daniel, on the other hand, noted Pope Francis, “tells us that he saw the Lord coming with the clouds as he ‘watched in the night visions.’”

The Pope encouraged young people to “watch in the night visions.”  “In other words, let your eyes remain bright even amid the darkness.  Never stop seeking the light amid whatever darkness we may bear in our hearts or see all around us,” he said.

Pope Francis told young people they had been “entrusted with an exciting but also a challenging task: to stand tall while everything around us seems to be collapsing; to be sentinels prepared to see the light in night visions; to be builders amid the ruins; to be capable of dreaming.”

He also told them that everyone is grateful to them when they dream, because “when you make Jesus your life’s dream, and you embrace him with joy and a contagious enthusiasm, this does us good,” the Pope said.

Thank you, continued Pope Francis, “because in a world that thinks only of present gain, that tends to stifle grand ideals, you have not lost the ability to dream.  This helps us adults, and the Church as well.”

Dwelling on the second image: Jesus who says to Pilate: “I am a king”, the Pope described how we are” struck by Jesus’ determination, his courage, his supreme freedom.”  “Jesus did not hide his identity, he did not mask his intentions, or take advantage of the opening that even Pilate had left for him,” Pope Francis said.

“With the courage born of truth, he answered: ‘I am a king’.  He took responsibility for his own life.”

By following Jesus and being inwardly free, said the Pope, we see life “as it really is”, and are not deceived “by the fashions of the moment and the displays of consumerism that dazzle but also deaden.”  Friends, he added, “we are not here to be enchanted by the sirens of the world, but to take our lives in hand, to ‘take a bite out of life’, in order to live it to the full.”

“In this way, with the freedom of Jesus, “we find the courage we need to swim against the current.”

Concluding his homily, Pope Francis urged young people to continue dreaming, even when they get older;  to be “free and authentic, be the critical conscience of society.”

“Be passionate about truth, he said, “so that, with your dreams, you can say: “My life is not captive to the mindset of the world: I am free, because I reign with Jesus for justice, love and peace.”