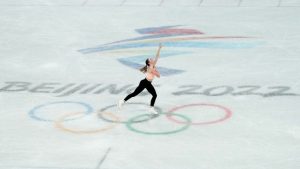 Pope Francis has sent warm greetings to participants in the Olympic and Paralympic Winter Games that are about to open in Beijing on 4 February and 4 March, respectively.

Speaking during the Wednesday General Audience, he sent wishes for success to both the organizers and the athletes, saying, “Sport, with its universal language, can build bridges of friendship and solidarity between people and peoples of every culture and religion.

“I therefore appreciate that the International Olympic Committee has added the word ‘Communiter,’ meaning ‘Together’ to the historic Olympic motto ‘Citius, Altius, Fortius’, that is ‘Faster, Higher, Stronger’: so that the Olympic Games may nurture a more fraternal world,” he said.

On 20 July 2021, the Session of the International Olympic Committee approved a change in the Olympic motto that recognises the unifying power of sport and the importance of solidarity.

As Pope Francis explained, the change adds the word “together” after an en dash to “Faster, Higher, Stronger” meaning that the new Olympic motto now reads in Latin “Citius, Altius, Fortius – Communiter.”

The Pope went on to say his thoughts go in particular to the entire Paralympic world.

“We will win the most important medal together if the example of the athletes with disabilities helps everyone to overcome prejudices and fears and to make our communities more welcoming and inclusive,” he said.

This, Pope Francis said, “is the real gold medal!”

He concluded saying that he follows with attention and excitement the personal stories of athletes who are refugees.

“May their testimonies help encourage civil societies to open up with ever greater confidence to all, leaving no one behind,” he said, wishing “the great Olympic and Paralympic family a unique experience of fraternity.”