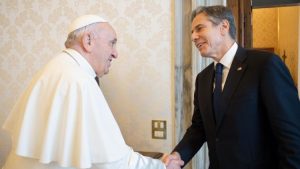 Pope Francis on Monday morning received US Secretary of State, Anthony Blinken, in the Vatican.

Responding to questions put to him by journalists, the Director of the Holy See Press Office said the audience took place in a cordial atmosphere. Matteo Bruni explained that it lasted about 40 minutes and that “it offered the Pope the occasion to recall his apostolic visit to the United States in 2015 and to express his affection for the the people of America.”

Blinken’s audience with Pope Francis came during a diplomatic tour of European States, the first by a US Secretary of State under the Biden administration. It comes on the heels of US President Joe Biden’s first presidential trip abroad on the occasion of the G7 meeting in Cornwall.

Before meeting with the Pope and Vatican authorities, Blinken took part in talks aimed at bringing peace to war-scarred Libya.