Pope Francis receives a group of refugees from Cyprus 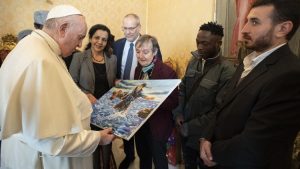 On his 85th birthday, Pope Francis met with a group of refugees arriving from Cyprus with the support of the Holy Father and the Community of Sant’Egidio.

The group of about ten is the first one scheduled to arrive in Italy with the Community of Sant’Egidio, following an agreement reached between the Holy See and the Italian and Cypriot Authorities during the Pope’s recent Apostolic Journey to Cyprus and Greece.

The refugees will be supported directly by the Holy Father, while Sant’Egidio will take care of their integration in Italy through a one-year migrant program, said the Holy See press office director, Matteo Bruni, in a statement.

Pope Francis welcomed the refugees in the Throne Room, and listened to their stories and those of their journeys from Congo-Brazzaville, the Democratic Republic of Congo, Cameroon, Somalia, and Syria.Some of them are doctors and computer technicians.

“You saved us!” a Congolese boy told the Pope. The Holy Father warmly welcomed the refugees addressing them individually and thanking them for their visit.

Wishing him “long life and good health” on his birthday, the refugees greeted the Pope with a picture by an Afghan refugee depicting migrants attempting to cross the Mediterranean.

Pope Francis asked about a little girl he met in the Mavrouni Camp, in Lesbos, who will arrive in Italy with her family to be treated in the coming days. After a photograph together, he left the group asking everyone to pray for him.