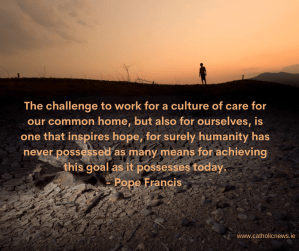 Pope Francis met alongside other religious leaders and scientists from around the world in the Vatican on Monday 4 October, to take a common stand for the protection of the environment, ahead of the UN Climate Change Conference scheduled for 1 – 12 November in Glasgow, Scotland.

The day-long meeting themed: “Faith and Science: Towards COP26” is a Vatican initiative born of a proposal of the embassies of Great Britain and Italy to the Holy See. It developed through monthly virtual meetings that began earlier this year, in which religious leaders and scientists were able to share their concerns and wishes for greater responsibility for the planet and for necessary change.

The Pope and the participants also presented a joint declaration to Alok Sharma, the president-designate of the COP26 climate summit, and to Luigi di Maio, Italian minister for foreign affairs.

In his address to the participants at the meeting, Pope Francis expressed gratitude for their presence which shows a “desire for a deepened dialogue among ourselves and with scientific experts” and proposed three concepts to guide their reflection: openness to interdependence and sharing, the dynamism of love, and the call to respect.

Pope Francis affirmed that “everything is connected in our world”, adding that science, as well as our religious beliefs and spiritual traditions, highlight the connectedness between ourselves and the rest of creation.

Indeed, “we recognize the signs of divine harmony present in the natural world, for no creatures are self-sufficient; they exist only in dependence on each other, complementing one another and in the service of one another,” the Pope said.

Recognizing this interconnectedness, therefore, means not only realizing the harmful effects of our actions “but also identifying behaviors and solutions to be adopted, in an attitude of openness to interdependence and sharing.” More so, this should lead to “an urgently needed change of direction” nurtured also by respective religious beliefs and spirituality, because for Christians, “openness to interdependence springs from the very mystery of the Triune God.”

In this light, the meeting, “which brings together many cultures and spiritualities in a spirit of fraternity,” strengthens our realization that we are members of one human family.

So, “to illumine and direct this openness, let us commit ourselves to a future shaped by interdependence and co-responsibility,” the Pope urged.

Pope Francis went on to emphasize that our common commitment must constantly be driven by the dynamism of love for “in the depths of every heart, love creates bonds and expands existence, for it draws people out of themselves and towards others.”

Love’s driving force is not set in motion once for all, but rather needs to be renewed daily, the Holy Father added. “Love is the mirror of an intense spiritual life: a love that extends to all, transcending cultural, political and social boundaries; a love that is inclusive, concerned especially for the poor, who so often teach us how to overcome the barriers of selfishness and to break down the walls of our ego.”

The Pope then highlighted the need to counter the “throwaway culture,” and the “seeds of conflict” which cause serious wounds to the environment and lead to the breaking of “that covenant between human beings and the environment, which should mirror the creative love of God, from whom we come and towards whom we are journeying.”

A challenge that inspires hope

The Holy Father said that the challenge to work for a culture of care for our common home and for ourselves is one that inspires hope because “humanity has never possessed as many means for achieving this goal as it possesses today.”

He recommended that the challenge can be faced on various levels, including two in particular: “example and action” and “education.” He also pointed out that many opportunities present themselves, as the Joint Appeal notes, that point to various educational and training programs that can be developed to promote care for our common home.

Explaining his third idea – the call to respect –  the Pope said it is a respect for creation, for our neighbour, for ourselves and for the Creator, but also mutual respect between faith and science, “in order to enter into a mutual dialogue for the sake of protecting nature, defending the poor, and building networks of respect and fraternity.”

In this sense, he continued, respect is more than an abstract and passive recognition of others but is also “an empathetic and active experience of desiring to know others and to enter into dialogue with them, in order to walk together on a common journey.”

Concluding, the Holy Father reiterated the importance of Openness to interdependence and sharing, the dynamism of love and a call to respect as interpretative keys that can shed light on common efforts to care for our common home.

He also noted that COP26 “represents an urgent summons to provide effective responses to the unprecedented ecological crisis and the crisis of values that we are presently experiencing, and in this way to offer concrete hope to future generations.”