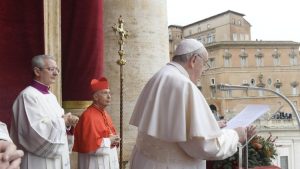 Pope Francis gave his traditional Christmas message followed by his “Urbi et Orbi” blessing (to the city and the world) to crowds of pilgrims gathered in a rainy Saint Peter’s Square and to the world via a broadcast and streaming spanning the globe.

In his opening words he announced “the Word of God, who created the world and who gives meaning to history and to humanity’s journey, became flesh and came to dwell among us.” This event that fills the heart with wonder, he noted, shows how “the Word became flesh in order to dialogue with us,” since “God himself, Father, Son and Holy Spirit, is dialogue, an eternal and infinite communion of love and life.” Through Jesus, God showed us the way to encounter and dialogue, “so that we might know it and follow it, in trust and hope.”

Patient dialogue for unity and peace

The Pope observed that our world needs dialogue, especially in these pandemic times where unity and solidarity are essential to overcoming the hurt in social relationships, putting them to the test.  Imagine what our world would be like if it were not for the patient dialogue of so many generous persons trying to keep families and communities together, preventing and resolving conflicts, he said.

Hear the cry of the suffering

Decrying the “great number” of seemingly unending conflicts, crises and divisions we are witnessing today, the Pope contrasted them with how today we celebrate the message of the Saviour’s birth, “source of true peace” that “resounds in our hearts” and the world. The Christmas message calls on us to respond to the tragedies in our world, he stressed, recalling the people of Syria who have suffered from ten years of war, and Iraq struggling to recover from decades of strife. He asked the world to hear the cry of the children of Yemen, suffering terribly as a result of a years-long conflict.

The Pope recalled the ongoing tensions between Israelis and Palestinians, the town of Bethlehem, the birthplace of Jesus, struggling from the economic downturn caused by the pandemic, as well as the nation of Lebanon’s unprecedented economic and social crisis.

Be open to dialogue

Despite these shadows, there is “the sign of hope”, the Pope underscored, “the Love that moves the sun and the other stars” became flesh, sharing in our plight and breaking down the walls of indifference. The little child “in need of everything”, came “to give us everything”. The Pope encouraged everyone then to ask the Lord for “the strength to be open to dialogue” and create in our hearts a real desire for “reconciliation and fraternity,” turning to Him in prayer.

Peace for the Middle East, Myanmar and Ukraine

Looking at areas of the world in special need of our prayers and solidarity, the Pope’s thoughts turned to all working to provide humanitarian aid to those fleeing their homelands for various reasons, including Afghanistan suffering from more than forty years of war. He remembered the people of Myanmar where intolerance and violence are rampant, affecting even the Christian community and places of worship. The Pope prayed for all people working to advance encounter and dialogue in these places, also remembering the people of Ukraine and its ongoing conflict.

Reconciliation and solidarity in Africa and the Americas

The Pope prayed for Ethiopia and that it might find the path to peace once again remembering first the needs of its suffering people. He also remembered those living in the Sahel region affected by the violence of international terrorism, for North Africa struggling to overcome social and economic instability, and for those suffering from conflicts in Sudan and South Sudan. May dialogue, mutual respect, solidarity and reconciliation prevail in the hearts of peoples in the Americas, the Pope prayed.

During this time of pandemic, the Pope prayed in particular for those feeling its affects, especially women who are the victims of violence, children suffering due to bullying, the elderly who are even more isolated. He asked the Lord to give peace of mind and unity to all families and the children they are raising.

May we all pray for ways to overcome the current health emergency, the Pope continued, and the Lord grant health to those who are infirm,  and vaccines for those who need them most. He remembered those generously caring for the sick and most vulnerable.

Recalling those imprisoned due to war, conflicts and political reasons, he prayed that they may soon return home. And recalling the millions of migrants and refugees, he asked everyone to see in them our common humanity and have a heart to understand their plight.

Care for our common home

The Pope also remembered our need to be attentive to our common home, our planet and the environment suffering from how we often treat it, praying for inspiration for political leaders to reach agreements to assure its viability future generations.

Happy Christmas to all!

Acknowledging and praying over the many challenges we are facing today, the Pope underscored that “hope prevails”, a child is born, who is the Word of God. May we “learn to listen to God, our Father, to listen to one another and to dialogue as brothers and sisters,” he concluded, and ask the Lord to “teach us” to walk beside Him “on the paths of peace.”

After reading his message, the Pope gave his Christmas blessing “Urbi et Orbi”.