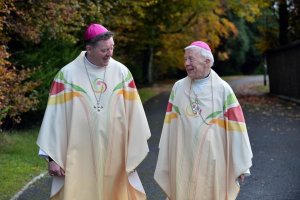 His Holiness Pope Francis has appointed Bishop Francis Duffy, Bishop of Ardagh and Clonmacnois, as the new Archbishop of Tuam.  The news of this appointment was made public this morning at 11.00am Irish time (12.00pm in the Vatican).

Following the announcement, Archbishop-elect Duffy concelebrated Mass in the Cathedral of the Assumption of the Blessed Virgin Mary, Tuam, with His Excellency Archbishop Jude Thaddeus Okolo, Apostolic Nuncio to Ireland; and Archbishop Michael Neary, Archbishop of Tuam.

Francis Duffy was born on 21 April 1958 in the parish of Templeport, Co Cavan to parents Mary Catherine Dolan and Frank Duffy.  He attended primary school at Munlough National School, Bawnboy, and completed his post-primary education at Saint Patrick’s College, Cavan.

Francis studied for the priesthood at Saint Patrick’s College, Maynooth and was ordained a priest for the diocese of Kilmore on 20 June 1982 in Saint Mogue’s Church, Bawnboy, Co Cavan by Bishop Francis MacKiernan.

He taught at Saint Patrick’s College, Cavan, and was appointed principal of Fatima and Felim’s Secondary School, Ballinamore, Co Leitrim in 1996.

After twelve years as principal Father Francis was appointed Diocesan Secretary and Financial Administrator and Chancellor.  During that time he was resident priest in the parish of Laragh, Co Cavan.  On 17 July 2021 he was appointed Bishop of Ardagh and Clonmacnois with his episcopal ordination taking place on 6 October 2013 at Saint Mary’s Church, Athlone.

Photo above shows Archbishop-elect Duffy with Archbishop Neary after the announcement.