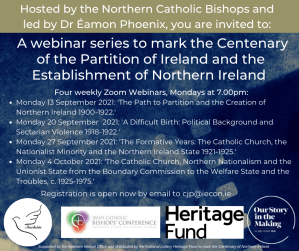 The Northern Catholic Bishops have announced that they will host an online webinar series of historical talks marking the centenary of Partition and the establishment of Northern Ireland.  These talks will be led by Dr Éamon Phoenix, political historian, columnist and broadcaster, who will be joined by a number of academic historians from the North and South over four Monday nights from 13 September to 4 October 2021.

Welcoming the announcement of the webinar series, Archbishop Eamon Martin, Archbishop of Armagh and Primate of All Ireland, said, “This webinar series is an opportunity for people of all traditions to engage with our shared history.  The presentations, expertly put together by Dr Éamon Phoenix, will allow for the story of the coming into being, and development, of Northern Ireland to be examined and analysed while critically assessing the role of the Churches, and others, in that respect.  On behalf of the Northern Bishops, I invite those with an interest in Church, society, politics and history to join us in helping to unravel further this complex and sometimes contentious story.”

“We are grateful for the funding we have received from the Northern Ireland Office and the National Lottery Heritage Fund which will enable the sharing of untold stories about important aspects of our history and to help bring the community together at this important moment.”

From next week, the programme of talks will be delivered online via Zoom over four Monday evenings from 7.00pm – 9.00pm, as follows:

Each week’s webinar will include a question and answer session.  The aim is to facilitate a respectful, cross-community discussion on this key historical period, its legacy and consider its lessons for a society moving forward post-conflict.

Each of the webinars are free of charge but registration is required in advance by email to cjp@iecon.ie.  The Zoom link will be sent out in advance of each webinar.

2021 marks the centenary of the formal partition of Ireland and the establishment of Northern Ireland as a self-governing entity within the United Kingdom.  The period 1919-22 saw the War of Independence; the passage at Westminster of the Government of Ireland Act (1920) which partitioned the island; the eruption of the serious sectarian violence in Belfast; the formation of the Ulster Special Constabulary; the Anglo-Irish Treaty and the Irish Civil War.

The webinar series will trace the development of partition and critically examine the role of key personalities such as Redmond,  Carson,  Craig, Lloyd George, de Valera, Collins and Cardinals Logue, O’Donnell and MacRory; the impact of the War of Independence on Ulster; the rise of the Ulster Special Constabulary; the Government of Ireland Act (1920) its lack of minority safeguards; the political and sectarian violence of 1920-22; the Treaty and the North; the policies of the two Irish governments, North-South relations and the Boundary Commission.

In particular, the focus will be on the roles of the Catholic and Protestant Churches in this contested period; the relationship between the new Unionist government and its Catholic/Nationalist minority and the significance of such issues as education, local government and law and order in the early 1920s. A final session will consider relations between the Catholic Church, the nationalist minority and the Northern Ireland State from the 1920s to welfarism, Civil Rights and the recent Troubles. .