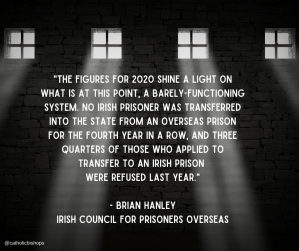 The Irish Council for Prisoners Overseas has reacted with concern following the publication of the Minister for Justice and Equality’s Annual Report on the operation of the Transfer of Sentenced Persons Acts (1995 and 1997). The report, published last week, provides annual figures on the number of prisoners transferred into and out of the State.

Brian Hanley, Coordinator of the Irish Council for Prisoners Overseas, said, “The figures for 2020 shine a light on what is at this point, a barely-functioning system. No Irish prisoner was transferred into the State from an overseas prison for the fourth year in a row, and three quarters of those who applied to transfer to an Irish prison were refused last year.

“These numbers are unprecedented and run contrary to the Government’s stated policy that prisoners should be permitted to serve their sentences close to their families – not least because of the humanitarian benefit to prisoner’s families but also because of the improved resettlement outcomes such family engagement and supported release programmes have for society. The system has essentially ground to a halt and Irish people in prison overseas and their families here in Ireland feel utterly let down by the State.

Mr Hanley continued, “Even the number of people applying to transfer into the State points to a broken system. Eight applications were received in 2020; whereas five years ago the number of applications was double that. Irish prisoners overseas are coming to the harsh realisation that the opportunity to serve their remaining sentence close to their families and support network is no longer a possibility.

“This is shortsighted, as prisoners who receive regular visits from families have been shown to be much less likely to reoffend. Many Irish people who serve a prison sentence overseas will return to Ireland following their release from prison but won’t have had the opportunity for regular family visits and the support and stability that can provide.

Mr Hanley added, “While it is welcome that applications are being dealt with more swiftly than in previous years, it is regrettable that two of the thirteen applications under ‘active consideration’ applied for a transfer in 2013. This is an unacceptable delay, given the uncertainty and anxiety experienced by prisoners and their families awaiting a decision.

“Problems with the Transfer of Sentenced Persons Acts were highlighted by a Supreme Court decision in 2016 and an amendment is required in order to deal with these issues. Despite the amending legislation being drafted two years ago, it is still not on the Government’s priority list of legislation. The Irish Council for Prisoners Overseas is calling on the Government to introduce the amending legislation without further delay.”

The Irish Council for Prisoners Overseas is a charitable organisation, which was established by the Irish Catholic Bishops’ Conference in 1985. The ICPO works on behalf of Irish prisoners overseas to provide information and support to these prisoners and their families.