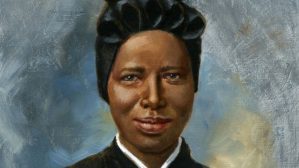 Tuesday 8 February, marks the International Day of Prayer, Reflection, and Action against Human Trafficking. Speaking ahead of the day after his Angelus prayer on Sunday, Pope Francis noted that the day is marked on the liturgical memorial of St Josephine Bakhita.

The bronze statue, made by Catholic artist Timothy P. Schmalz is dedicated to trafficking victims and to all women, especially the religious sisters who work to free women from modern-day slavery.

Representing “so many girls”

St Josephine represents “so many girls” who the Pope said we see on the street: they are not free from this deep wound, inflicted by the shameful pursuit of economic interests without any respect for the human person, stressed the Pope. They are slaves of the traffickers, who send them to work, and beat them if they do not return with the money.

“This is happening in our cities today” continued the Pope, inviting all those present to “really think about it”.

Pope Francis then went on to stress that in the face of these scourges of humanity, he expresses his sorrow, and urges those with responsibility to act decisively to prevent both exploitation and the humiliating practices that afflict women and girls in particular.