Grandparents, elderly are bread that nourishes our life – Pope Francis 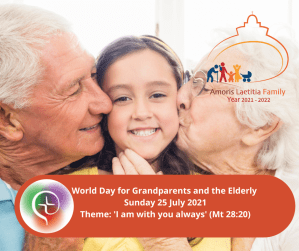 As the Church marked the first World Day of Grandparents and the Elderly, Archbishop Rino Fisichella, celebrated Holy Mass in the Basilica of St Peter, standing in for Pope Francis, who is still recovering from surgery.

Archbishop Fisichella read the homily prepared by Pope Francis, in which the Holy Father reflected on the Gospel for the Seventeenth Sunday in Ordinary Time, which recounts Jesus’ miraculous feeding of the five thousand with just five loaves of bread and two fish.

The Holy Father reflected on “three moments” in the Gospel: “Jesus sees the crowd’s hunger; Jesus shares the bread; Jesus asks that the leftovers be collected.” These three moments, he said, “can be summed up in three verbs: to see, to share, to preserve.”

Seeing the needs of each person

The miracle of the loaves and fishes, said Pope Francis, “begins with the gaze of Jesus, who is neither indifferent nor too busy to see the hunger felt by weary humanity.” Instead, He is concerned for everyone, and “understands the needs of each person.”

Our grandparents look on us the same way, the Pope said. Their love helped us to grow, and we, in turn, are called to share our love and attention. “Let us lift up our eyes and see them,” Pope Francis said, “even as Jesus sees us.”

A covenantal sharing of life

The Holy Father pointed out that Jesus fed the people with the loaves and fish shared by a young person. “At the heart of the miracle,” he said, “we find a young person willing to share what he had.”

Pope Francis insisted that “Today we need a new covenant between young and old. We need to share the treasure of life, to dream together, to overcome conflicts between generations and prepare a future together.” He added that without this “covenantal sharing in life,” we risk dying of hunger.

“I have often mentioned the words of the prophet Joel about young and old coming together,” the Pope said. “Young people, as prophets of the future, who treasure their own history. The elderly, who continue to dream and share their experience with the young, without standing in their way. Young and old, the treasure of tradition and the freshness of the Spirit.”

Nothing meant to be cast aside

Reflecting on Jesus’ instruction to gather up the fragments of bread after the miracle, the Pope said, “This reveals the heart of God” who is concerned that “nothing be lost, not even a fragment.” This is especially true of people, he said, who must never be discarded.

“We need to make this prophetic summons heard among ourselves and in our world: gather, preserve with care, protect.”

Pope Francis emphasized the importance of “protecting” our grandparents, as they protected us as we grew. “Let us protect them, so that nothing of their lives and dreams may be lost.”

The bread of our lives

Grandparents and the elderly, said Pope Francis “are the bread that nourishes our life.” In the conclusion of his homily, he pleaded, “Let us not forget them. Let us covenant with them” so that, “together, young and old alike” might “find fulfilment at the table of sharing, blessed by God.”

At the conclusion of Mass, young people offered flowers to the elderly who were present in the Basilica for the Liturgy.