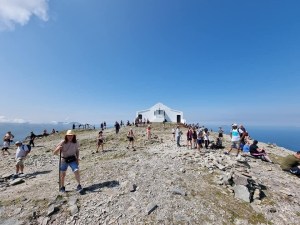 The annual Reek Sunday Pilgrimage on Croagh Patrick, Co Mayo, which was cancelled last year due to the Covid-19 pandemic, has been going ahead this year in an extended format from Wednesday to Saturday, throughout this month of July, instead of the traditional focus on the last Sunday of the month, Reek Sunday.  This change of format was made in the interest of publish health due to the pandemic.

In thanking priests and pilgrims for their support in making the 2021 Croagh Patrick pilgrimage so far a success, the Administrator of Westport Parish, Father Charlie McDonnell, said,  “The 2021 Croagh Patrick pilgrimage, which is operating differently this year, continues to work well.  By spreading the pilgrimage-out over the month, we have placed safety first and have given tremendous flexibility to pilgrims who wish to climb Ireland’s holy mountain.

“In previous years, the pilgrimage season has stretched from June to September and religious facilities were only afforded to pilgrims on the last Sunday of July, Reek Sunday.  However, this year’s novel and adventurous departure has successfully broadened the availability of sacramental and other faith ministries provided by the Church, not only on the summit of Croagh Patrick, but also for the first time ever at the base of the mountain where Adoration and Confessions have been made available.  I sincerely wish to thank priests and pilgrims for all their support and cooperation in making the 2021 pilgrimage season a success to date.”

Father McDonnell concluded, “There is now one week left for pilgrims to avail of what is being provided for this year’s pilgrimage, throughout Wednesday to Saturday.  We thank God that it has been a case of ‘so far so good’ and I encourage pilgrims to plan their trip carefully from a personal safety perspective.  This year the pilgrimage will conclude on the morning of 31 July, the day after Garland Friday, when by tradition the last Friday in July is dedicated to local people who wish to climb Croagh Patrick.”

Croagh Patrick, Ireland`s holy mountain, (2,510ft/765m) lies within the parish of Westport about 8km outside of the town.  Croagh Patrick dominates the landscape of southwest Mayo both spiritually and physically.  The Croagh Patrick pilgrimage is associated with Saint Patrick who, in 441AD, spent 40 days and nights fasting on the summit, following the example of Christ and Moses.  The name ‘Reek Sunday’ comes from Patrick’s ability to Christianise many pagan customs including the festival of Lughnasa, which previously had heralded the start of the harvest festival honouring the ancient pagan god Lugh, whose name is encompassed in the Irish word for August: Lughnasa. The festival’s tradition became absorbed into the new Christian beliefs and locally become known as Domhnach na Cruaiche (Reek Sunday).  The Reek pilgrimage has been undertaken for 1,500 years and an estimated 100,000 pilgrims visit the holy mountain annually.  A virtual tour of the mountain can be viewed on the website of the Archdiocese of Tuam www.tuamarchdiocese.org.

The Reek Pilgrimage normally takes place on the last Sunday in July, however the indulgence for the pilgrimage extends throughout the summer months up to the end of September.

Details of how to fulfil the spiritual requirements of the pilgrimage are available on www.westportparish.ie and on signage in the carpark at the start of the ascent.