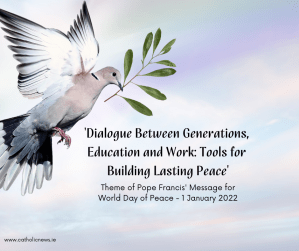 The Vatican Press Office hosted a press conference on Tuesday to coincide with the release of Pope Francis’ message for the 55th World Day of Peace, to be held on 1 January.

The Pope’s message goes under the title: “Dialogue Between Generations, Education and Work: Tools for Building Lasting Peace”.

Three Vatican officials presented the message at the Press Office, along with an activist for migrant worker’s rights in Italy.

Yearning for peace in creativity

Cardinal Peter Turkson, Prefect of the Dicastery for Promoting Integral Human Development, was the first to present his thoughts on Pope Francis’ message.

He offered a reflection on the Biblical roots of the message, which begins with the prophet Isaiah: “How beautiful upon the mountains are the feet of the messenger who announces peace” (Is 52:7).

The Cardinal said humanity – in the footsteps of ancient Israel – yearns for peace, especially in moments of societal upheaval and political disaster.

He added that our world today mirrors several aspects of life for Israel during the exile. These include the lack of moral or ethical fiber and the political will to commit to life-saving measures in the face of the pandemic and climate change, as well as a short-term focus on profits at the expense of long-term stability.

Pope Francis’ message for the World Day of Peace, said Cardinal Turkson, highlights the need for every person to play a creative role in the project for peace, building the “architecture” of peace.

Peace, added the Cardinal, is both a gift of God and the fruit of a culture of dialogue and encounter.

Sr. Alessandra Smerilli, interim Secretary of the Dicastery for Human Development, also offered her reflections on how the Church speaks with the prophet Isaiah in favor of peace.

She gave voice to the “cry of the earth and of the poor” which laments the war which the current economic system has declared on the environment.

Young people, she added, are the intended recipients of the Pope’s message, since they—more than other generations—long to carry through on promises to tackle the issue of climate change.

An intergenerational alliance is needed so that young people and adults can team up to push back against environmental destruction, said Sr. Smerilli.

Work also plays an important role in promoting peace through human dignity and justice. “Work is much more than a means for earning a living: it is an expression of our identity and dignity, of our social and relational vocation, and of our caring and tilling the earth, with God and with others,” she said.

Earth crying out for peace

Fr. Fabio Baggio, Under-Secretary of the Migrants and Refugees Section, focused his remarks on the ecological aspect of Pope Francis’ Peace Day message.

He said the world is more interconnected than ever before, a fact which has both positive and negative consequences as seen in climate change and the pandemic.

The survival of our common home, he added, rests on peace among the human family, so that we can face our challenges together.

Fr. Baggio highlighted the three tools which the Pope offered to achieve the goal of dialogue and peace: sincere communication, education, and work.

These three, he said, “are not the only tools to build a lasting peace, but they undoubtedly represent an excellent toolkit for the journey which awaits us.”

Discovering the spiritual roots of peace

Dr. Aboubakar Soumahoro, an Ivorian-born labor activist, president of the Farmworkers League, and spokesman for Invisibles in Motion, joined the three Vatican officials to offer a unique perspective on Pope Francis’ message.

Peace, he told reporters, is a crucial value in our world which “languishes in evil” and has pulled a blanket of blindness over the minds of our contemporaries.

The world needs a “spiritual revolution” in order to rebuild the sense of belonging which humanity has lost.

“The peace which we need,” said Dr. Soumahoro, “is not that which the world gives, but the perfect peace which can give repose to our souls and spirits, as well as courage and strength to overcome every challenge.”