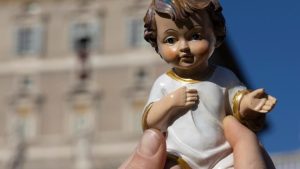 At the Sunday Angelus, Pope Francis sayid the Advent Season is about asking ourselves how to prepare for Christmas and what we can do for Jesus and others, concretely, in our lives.

On the Third Sunday of Advent, Pope Francis greeted the many pilgrims present, including many families with their children, who brought little statuettes of the Child Jesus to be blessed on this day, known as “Bambinelli Sunday”. Saint Pope Paul VI started this tradition over fifty years ago.

Speaking from the window of the Apostolic Palace overlooking the Square, Pope Francis greeted the children present, wishing them and their families a blessed Christmas. He blessed the figurines of the Child Jesus they brought with them to be placed in their Christmas nativity scenes back home.

He also offered special greetings to pilgrims from Latin America present in St. Peter’s Square as part of a group dedicated to Our Lady of Guadalupe, whose feast is celebrated annually on December 12. He also greeted all those from Caritas Internationalis celebrating their 70th anniversary, and praised their work helping the most vulnerable in the world, especially those affected by environmental degradation.

Before leading the recitation of the Angelus, the Pope reflected on today’s Gospel reading, which recounts John the Baptist responding to those who come to him asking how to change their lives for the better, since their hearts were touched by the Lord. It reflects an enthusiasm for the Lord’s coming and a desire to prepare themselves concretely for this joyous, life-changing experience. In the same way, we too should ask ourselves what we should do within our own lives, the Pope suggested, and reflect on what we are called to do and become.