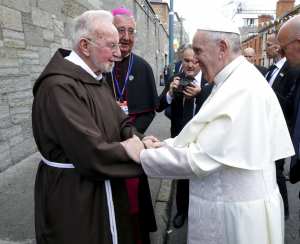 A long queue of people forms outside the Capuchin Day Centre, which has, for over 40 years been welcoming and assisting the homeless and needy of Dublin.

It’s lunchtime, and volunteers are giving out meals from a window under the shelter of a new canape which has been put up to protect people from the rain.

The scene here is far cry from the joy and excitement that greeted Pope Francis as he made his way down these streets of Dublin’s inner city against a backdrop of Papal flags proudly displayed outside houses in the area.

Impact of the pandemic

But nearly three years on from that Papal Visit to the Centre, Dublin is a city in lockdown grappling with a pandemic that continues to spread, impacting people’s health and livelihoods.

When the Pope visited the Capuchin Day Centre, he was able to see for himself the tireless work of volunteers and staff and greet those in need, but these days, due to public health restrictions, the rooms here are silent and devoid of guests.

However, despite the current situation, the work continues; A sea of white paper bags covers the length and breadth of the main reception area containing meals for those who are homeless or can’t make ends meet.

Upstairs, a photo of Pope Francis greeting Br Kevin Crowley, the Centre’s founder and co-director is proudly displayed in his office.

“The most extraordinary gift that God ever gave to the Centre was Pope Francis arriving here and for me to see him coming up Bow Street on the Pope mobile,” he recalls.

Br Kevin also remembers vividly the Pope making a beeline to talk to the needy families and children who were waiting in the Centre to see him.

“That was his main concern coming here, to visit the homeless people and the people in need. That has brought a great blessing to the place,” he says.

“I remember on the Monday morning one of the homeless people came to me and he said, ‘I had very little faith up to now, but being here on Saturday, meeting the Holy Father and the way he greeted us, for me it was like it was Jesus in our midst. And I will never forget it and it has restored my faith and is something I will carry with me for the rest of my life.’”

In the past year, more and more people in Dublin have been feeling the economic impact of the pandemic. Although the Capuchin Day Centre can’t welcome people inside at present due to restrictions, Br Kevin says the number of people who have lost their jobs and the number of people seeking help from the Centre has increased immensely.

“Every morning we give out a take-away breakfast and we’ll have anything from 200 to 250 people for that, and that would be families,” he explains. “And then in the afternoon we give out take-away dinners and most days we’d have anything from 750 to …900 and that’s even a huge increase. And it’s not only just people who are homeless or people on the streets, it is people who are finding it so difficult to make ends meet. There are people who have lost their jobs; there are people who have difficulty trying to put food on the table for their families and those are the people that we’re really concerned about. It’s really very sad to see so many people coming here, and especially mothers with children; that has got huge as well.”

One of the things, he says that saddens him the most is not being able to have people into the Centre.  “Every morning we were able to have a number of people in for showers… and we can’t have those at the moment and unfortunately, if you look out there we have a new extension for the families and the little children and we can’t use it at the moment because of the COVID, so that’s a huge disadvantage and it’s a huge disadvantage for the little children that we can’t have them in especially coming up to Easter.”

The Capuchin Friar points out that the pandemic has also “brought an atmosphere of isolation, in the sense that people are afraid to go out; elderly people are afraid… people are depressed; people have a great difficulty in coping with the situation.”

Over the last year of this pandemic, Br Kevin says he has received many letters from older people speaking about the isolation and loneliness they have felt not being able to leave their home. Many of them, he says, write about the heartbreak they feel at not being able to see or hold their grandchildren while the restrictions are in place. They also lament the fact that the current public health restrictions mean they can’t physically attend Mass and partake of the Sacraments. He too expresses his sadness that, for the second year running, there will be no Easter ceremonies in churches.

It’s the older people in isolation who are praying for an end to this pandemic, stresses Br Kevin, adding that he thinks the one way we are going to bring it to an end “is by prayer and being in the presence of the Lord himself.”

Unfortunately, Easter at the Centre this year will be different from past years with the Capuchin Friar saying they are “coping in a big way and observing in a big way the restrictions being laid down by the Government and we make sure they’re not being abused in any way.”

When Pope Francis came to this Centre in 2018 he paid tribute to the Capuchin Friars and others who are doing such vital work to help those who are homeless or living in poverty. He said families “facing grave challenges and real hardship are being shown love and support by the Capuchin Fathers.”

That love and support continues here at the Capuchin Day Centre, and despite the current pandemic, Br Kevin and his team are looking to the future with hope. Apart from the new extension for families and children, new showers and amenities for the disabled have been installed and are waiting to be shared with people in need when the Centre fully reopens.

The motto at the Capuchin Day Centre Dublin is “No one goes Hungry”. For the homeless and those living in poverty amid this pandemic, never has that meant so much.