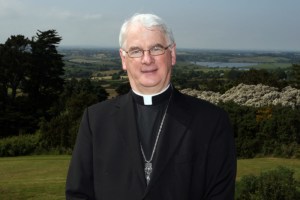 In response to recent violence on the streets of Belfast, clergy from the four main churches in Northern Ireland held an ecumenical service on Friday 9 April, close to the areas which have been scenes of unrest.

Among those who gathered at a gate in the Peace Wall at Larnark Way in the west of the city was Bishop Noel Treanor of the Diocese of Down and Connor.

The bishop has described the disturbances over the last two weeks as “deeply concerning for all of us who believe in and have worked together for a shared, brighter future for our society”.

He has also urged politicians to “weigh carefully the impact of their words, to avoid the deeply damaging politicization of civic policing and to use the available mechanisms of accountability and influence to deal with any concerns that may arise.”

The recent unrest saw a number of police officers injured after coming under attack by missiles, and water cannon was used for the first time in six years to contain rioting.

Speaking to Vatican Radio, Bishop Treanor said he hoped steps would be taken in public leadership roles to persuade those who have come out onto the streets, to see that there is a better way to deal with whatever issues that are giving rise to concern.

He explained that there are layers of issues that lie behind the recent unrest. The immediate one, he said, is the perception on the part of the Unionist tradition, particularly in its economically deprived areas, that it has been left behind and abandoned. The Bishop went on to say that many in this community feel betrayed by the British government, especially with regard to the Northern Ireland Protocol on the sea border between Great Britain. “In their perception,” he continued, “since the Good Friday Agreement, the Nationalist community has advanced… more than they have.”

The recent Brexit deal is also an area where the Unionist community feel disillusioned. “I think they feel betrayed there; they feel that they were led into voting to exit from the European Union and were not really told the hard facts of the consequences of this step,” he said.

Another issue that is a bone of contention, said the Bishop, is the fact that the government in London has, in certain instances, and particularly in matters with regard to the abortion issue, given powers to the Secretary of State, Brandon Lewis, despite the re-establishment of the Stormont Assembly. This, he added, appears to dilute the autonomy or identity of Northern Ireland.

An additional factor which Bishop Treanor mentions is the suggestion that there should be a border poll on the future of Northern Ireland.

In order to re-establish a sense of trust that has been damaged in recent times, the Bishop of Down and Connor said it is up to local politicians and the Dublin and London governments, to “accompany, to parent, to promote,” the institutions of the Good Friday Agreement. He also noted the political narrative needs to be a very “sensitive and supportive political narrative.”

Asked how the Churches can play their part, he gave an example of the Parish Priest of St Paul’s Church, on the Falls Road in Belfast, who last Wednesday night, amid disturbances, played a key role in calming young people.

In some instances he ended up taking stones and missiles away from them and persuaded them to pull back. Bishop Treanor went on to describe Fr Tony Devlin’s role in helping to ease tensions as “exemplary.”