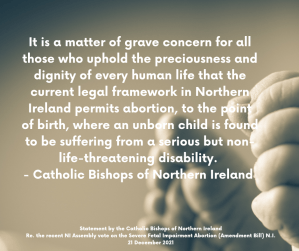 A Bill calling for the prevention of abortions in cases on non-fatal disabilities (the Severe Fetal Impairment Abortion Amendment Bill NI,) was defeated in a vote at Stormont last Tuesday. Assembly members voted 45 to 42 to reject the Bill.

The Catholic Bishops of Northern Ireland have expressed their grave concern at the vote. In a statement issued last evening, they said, “It is a matter of grave concern for all those who uphold the preciousness and dignity of every human life that the current legal framework in Northern Ireland permits abortion, to the point of birth, where an unborn child is found to be suffering from a serious but non-life-threatening disability. The nature of such a disability is not defined in our legislation but will include conditions such as Down’s Syndrome. The effect of similar legislation in other parts of the world, especially in Scandinavia, has been to screen out of existence an entire sector of humanity.

“The Severe Fetal Impairment Abortion (Amendment) Bill, recently voted on in our Assembly, was a measured and reasonable attempt to address this injustice and remove from the current abortion regulations discrimination against unborn children with non-fatal disabilities. Its defeat in the Northern Ireland Assembly represents a profound and fundamental failure to respect the equality of all persons, born and unborn, in our society.

“As a consequence, the Abortion Law in Northern Ireland will send a message to all citizens that unborn disabled babies are less valued than those who are able-bodied. This is the opposite of a commitment to equality, professed by so many who supported, directly or indirectly, the progress of this unjust legislation.”

Bishops went on to say, “To dispose of unborn human beings on the grounds that they are disabled is morally abhorrent and indefensible in a civilised society. Laws that discriminate unjustly against persons with disabilities at any time, including the time they spend in their mother’s womb, are completely unacceptable.

“Discrimination in this context is not limited to the unborn child with a disability. Those parents who choose to continue with the pregnancy could also face the prospect of being discriminated against when it comes to accessing medical care, education and financial support for their child. Therefore, every effort must be made to ensure that children with disabilities and their families are treated justly with regard to the allocation of resources and funding. It is the least they can expect in a society which claims to value respect and compassion in the treatment of all its citizens.

“We have consistently called for the equal right to life and compassionate care for a mother and her unborn child. The genuine difficulties experienced by some women in pregnancy are not addressed by ignoring the existence of the other life, or by supporting the fiction that abortion is exclusively a ‘health care issue’ or solely a matter of individual choice. The right to life and the equal dignity of every person is the concern of every person and the whole of society, not just the individual concerned.”

Concluding their statement, bishops said, “As we approach the celebration of the birth of the child Jesus, a birth which brings the hope of peace rooted in dignity to the whole world, we call on all Christians and citizens who believe in the equal rights of all, to redouble their efforts to defend the most vulnerable in our society from this unjust legislation. As we look to a new year in which we will all have the opportunity to elect those responsible for our legislative values and framework, we shall all need to reflect carefully on the central importance of these fundamental human values in the decisions we make.”

“The effect of similar legislation in other parts of the world has been to screen out of existence an entire sector of humanity… the Abortion Law in Northern Ireland will send a message to all citizens that unborn disabled babies, are fundamentally less valued than those who are able-bodied. This is the opposite of a commitment to equality, professed by so many who support this unjust legislation.”

This statement was issued in the names of Archbishop Eamon Martin, Archbishop of Armagh & Primate of All Ireland and Apostolic Administrator of Dromore; Bishop Noel Treanor, Bishop of Down and Connor; Bishop Donal McKeown, Bishop of Derry; Bishop Larry Duffy, Bishop of Clogher; and, Bishop Michael Router Auxiliary Bishop of Armagh.