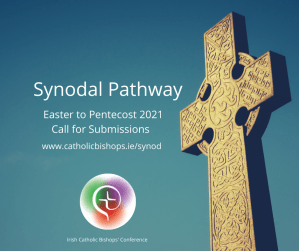 Bishops have today announced an initial submission phase of the Synodal Pathway for the Catholic Church in Ireland.

Explaining the initial submission phase Bishop Brendan Leahy of Limerick said, “Before embarking on the Synodal Pathway consultation, bishops are inviting submissions to reflect on what methods/models to adopt in these coming two years of conversations. For example: parish hall meetings, focus groups, questionnaires, deep-listening sessions; written submissions; family-focused gatherings; summary of findings of assemblies that have already taken place across dioceses; and/or conferences.

“Feedback, which should be no more than 300 words and submitted by Pentecost Sunday 23 May 2021, ought to focus on the nature of the process for the consultation i.e. how we can best go about this initial phase of establishing the conversation, rather than on the prospective themes for the Synodal Pathway, which will be addressed in the next phase.

“It is said that the journey of a thousand miles begins with one step. I think the possibility of submissions on the Irish Bishops’ Conference website on what methods/models to adopt in the coming two years of conversations is a simple but significant step and I hope many will offer their suggestions.”

On the new Synodal Pathway webpage, launched today at www.catholicbishops.ie/synod, people are invited to offer feedback to the following question: What would be your preferred option for engagement in a conversation process about the Synod?

The responses will be considered by the task group to be put in place by the bishops this summer to plan and oversee the first steps along the synodal pathway.

Background to the Synodal Pathway

On 10 March, the Irish Catholic Bishops’ Conference announced a new Synodal Pathway for the Catholic Church in Ireland leading to the holding of a National Synodal Assembly within the next five years.

Conversations at local, regional and national level have informed the work of a dedicated subgroup of the Bishops’ Conference which was established to further explore this idea. During their 2020 Winter General Meeting, bishops decided to proceed along a synodal pathway, and, since then, have been assisted and greatly encouraged by Cardinal Mario Grech and Sr Natalie Becquart, of the General Secretariat for the Synod of Bishops in Rome. Cardinal Grech and Sr Becquart addressed the Irish Bishops on the theme of synodality on 3 February 2021.

The aim of this phase will be to design the particular form of our National Synod and prepare directly at local, regional and national level for the holding of the Synod.

Next June, at their Summer General Meeting, bishops intend to establish a task group to plan and oversee the first steps along the synodal pathway.  This task group will be made up of lay women and men, including young people, religious, priests and bishops.

The next two years (2021-2023) will be a period of prayer, listening and discernment, involving a nationwide consultative conversation on the theme: “For a synodal Church: communion, participation and mission”. This will allow individuals and parishes, religious orders and associations as well as groups, movements and organisations, both within the Church and in Irish society at large, to share their insights into the Church in Ireland – past, present and future.