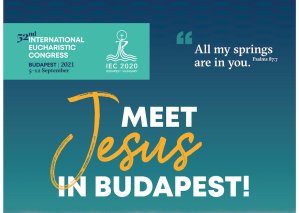 Bishop Kevin Doran, Bishop of Elphin and the Irish Bishops’ delegate for International Eucharistic Congresses has offered a short reflection ahead of the gathering in Budapest.

Bishop Doran said, “Hungary has very deep Christian roots dating from the beginning of the second millennium. The first King of Hungary, St Stephen (1000-1038 AD) led Hungary into the community of European Christian nations. Two hundred years later, the Hungarian Princess, Elizabeth, married into the royal family of Thuringia and, alongside of her responsibilities as Queen, devoted her life to the service of the poor and the care of the sick, following the rule of St Francis of Assisi.

“The International Eucharistic Congress was last celebrated in Budapest in 1938, just before the Second World War. Since then, the people of Hungary have spend many years under oppressive regimes, first the Nazis and then Marxist Socialism.Fascism and Communism imposed a kind of unity in which the state took priority over the dignity and freedom of the individual person. By contrast, the Eucharist invites us into a communion of love, in which each person, created in the image and likeness of God is loved for who he or she is.

“Hungary has drawn new life from the blood of the Martyrs in the second half of the twentieth century. It is hoped that the Eucharistic Congress, after years of repression, will contribute to the renewal of the Catholic Church in Hungary. There is also a strong awareness that people of all faiths suffered under the Fascists and under the Communists. This brings with it the hope that the Congress nay contribute to a new kind of relationship between people of different faith traditions, so that they may all grow together in mutual love and peace.” 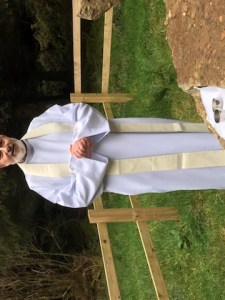 Reflecting on the world context at this time of the Eucharistic Congress, Bishop Doran said, “At a time when the world faces a variety of geo-political crises and now a global pandemic, the theme of the International Eucharistic Congress reminds us that all life comes from God. In English, the theme is translated “All My Springs are in You” and may initially sound a bit strange. It comes from Psalm 87, which celebrates Jerusalem as the place where God lives among his people. The “springs” refer to the fountains in the city of Jerusalem. Many people will know that, throughout the bible, streams and fountains are often used as a symbol of the gift of life and faith that comes from God. Drawing on the rich Eucharistic theology that has its origins in the Gospels and in the writings of St Paul, the Eucharist is described in the documents of the second Vatican Council as the “source and summit” of the Christian life. It is a way of saying that everything we are as Christians flows from the body of Christ, who died and is risen.

“Using the words of Pope St John Paul II, the theological document of the 2020 International Eucharistic Congress reminds us of the “cosmic dimension” of every celebration of the Eucharist. “Even when it is celebrated on the humble altar of a country church, the Eucharist is always in some way celebrated on the altar of the world. It unites heaven and earth. It embraces and permeates all creation”. Through the perfect humanity of Jesus offered to the Father, the Eucharist gathers people everywhere, and indeed gathers the whole of creation, in one great offering to God. At a time when we are still significantly limited by the impact of COVID-19, and fewer people than usual can participate in person at the Eucharistic Congress in Budapest, it remains possible for us to join in communion with our brothers and sisters in Budapest, and all around the world, as we celebrate around the “humble altars” whether they be in a “country Church” or a huge Cathedral.”

The official website for the International Eucharistic Congress has lots of resources and detailed information on the Programme from 5 – 12 September. See www.iec2020.hu/en for more.