As a society we have to find ways to open ourselves to the hidden truths about our past so that proper healing can happen.  – Archbishop Eamon Martin at Bloody Sunday 50th anniversary Mass 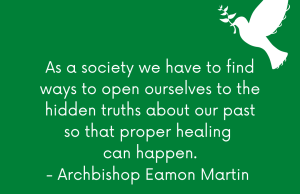 Archbishop Eamon Martin, Archbishop of Armagh and Primate of All Ireland, delivered the homily at Mass in Saint Eugene’s Cathedral, Derry on Sunday 30 January to commemorate the 50th anniversary of the Bloody Sunday massacre on 30 January 1972.
Fifty years later Archbishop Eamon began his homily by sharing a line from the Peace Prayer:

‘Oh Heavenly Father, God of love and peace, send your blessed peace into our hearts, our homes and our country.

The archbishop said, “Some of you will remember those opening lines from the Peace Prayer often offered by the people of Derry in the 1970s during the darkest days of the Troubles.  It was introduced by the late Bishop Edward Daly not long after his ordination here in Saint Eugene’s Cathedral.  We prayed it at home at the end of our family rosary every evening, and I also remember the day in the mid ‘70s when the people of Derry took to the streets in their thousands praying that prayer in a great crusade for peace – calling for an end to the sectarian violence which was bringing so much death and destruction, injury and grief to our city.  Bishop Daly was unequivocal in his calls and work for peace.  I have no doubt that his strong opposition to violence was shaped not only by his deep respect for all human life, but also by his first hand experience of horrific violence, death and fear on Bloody Sunday.

“The horror inflicted on Derry on that day has thankfully been challenged and exposed.  We are grateful for the dignity, determination and example of the families, friends and neighbours of those whose lives were so cruelly taken on 30 January 1972, just a short walk from this Cathedral.

“The shocked silence which fell on Derry when the shooting stopped around 4.40pm that afternoon was compounded by the deliberate silence of governments and politicians who wilfully ignored the truth.  Immediately the priests who had been present, tending to the wounded and dying, and many other eye witnesses, called it as it was: wilful murder; shooting indiscriminately; no provocation.

“Many years later – too many years – Lord Saville would conclude that the shooting and killing of these innocent civilians, who had not posed any kind of threat, was ‘unjustified and unjustifiable’.  Saville found that the soldiers, as a justification for their actions, ‘knowingly put forward false accounts’ about shooting at only armed targets.”

‘O Lord Jesus, you died to make peace between God and mankind.  We long for justice and peace; send us your gift of peace.’

Archbishop Martin went on to share his memory of Bloody Sunday, saying, “Even though I was only ten years old at the time, I had a sense of the awful calumny that followed Bloody Sunday.  I remember we were asked to bring to school our family’s copies of the Derry Journal so that the truth could be sent out and shared around the world.  The pain of loss suffered by the Bloody Sunday families continued to be sharpened for many more years by blind eyes, deaf ears and the deliberate concealment of the truth.

“The second reading of today’s Mass is taken from the letter of Saint Paul to the Corinthians.  Saint Paul describes the characteristics of love – how it is patient and kind, never jealous or boastful or conceited.  One phrase from that reading speaks strongly to us today: ‘Love delights in the truth’ (1 Cor 13:6).

“In Saint John’s Gospel, Jesus often speaks about Truth – on one occasion He said, ‘I am the Way, the Truth and the Life’ (Jn 14:6); on another, He said, ‘The Truth will set you free’ (Jn 8:32); and, very powerfully when He himself was facing false witnesses and unjust condemnation before Pontius Pilate He said, ‘I have come into the world, to bear witness to the truth; everyone who is of the truth listens to my voice’ (John 18:37) – to which Pilate famously responded, ‘Truth? What is Truth?’

“Very painfully the Bloody Sunday families were denied for too long the truth about what happened to their loved ones.  And sadly they are not alone.  A legacy of heartbreak, and with it, a dark shadow of secrecy, still hangs over much of our troubled past.  Many families from right across our communities still endure the anguish of not knowing why, or how their loved ones were killed or injured or punished or targeted or disappeared or defamed or locked up, or interned or otherwise banished.  Their unanswered questions linger on, as a constant nagging reminder to the next generation of unfinished business, of a grief that is unsatisfied with silence, a pain that does not go away but lies beneath, an unhealed wound that is passed on to the next generation.  It is difficult for them to move on.  It is hurtful, as some have proposed, to expect them to simply ‘draw a line’ under the past.”

Archbishop Martin concluded, “Dealing with the legacy of our past and building meaningful reconciliation is complicated and delicate.  As a society we have to find ways to open ourselves to the hidden truths about our past so that proper healing can happen.  We have begun to explore and build a shared vision for our future on this island.  But if we are to unite hearts and minds and nourish a genuine hope for lasting peace and reconciliation in Ireland, then we have to work together on healing the legacy of our shared past, because peace can only flourish in the light of knowledge, truth and justice.

“We know that peace is so much more than an end to war and conflict.  Peace from poverty; peace from hunger; peace for those living on the streets or in camps for migrants; peace of mind and heart for those denied the truth, closure and justice both here and around the world; this is the kind of deep peace we should all strive for today.  It is the peace of Christ.  Such a gift of peace would be fitting reward for those who marched on that awful day in 1972 – some of them never to march again.  May they rest in the peace of the Lord, and may we live in, and build that same peace today.”