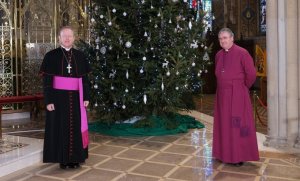 The Catholic and Church of Ireland Archbishops of Armagh have issued a joint message for Christmas in which they offer words of hope to people who are contemplating another difficult Christmas because of the Covid-19 pandemic. ]

You can read their message below:

Just before Christmas 1937 Monsignor Ronald Knox wrote a letter to the English Catholic periodical The Tablet.  Knox was the son of a Church of England bishop and had converted to Catholicism shortly after taking a brilliant First at the University of Oxford.  He later became the first Catholic Chaplain to Oxford since the Reformation.

The letter arose from a remark that a friend of Knox’s had made, that she “wasn’t going to have her house turned upside down just because it was Christmas”.  Thinking afterwards about what she had said, Knox wrote in his letter, “What is Christmas from start to finish but things being turned upside down?”

Even the days, continually darkening in the run-up Christmas, turn with the solstice and light begins to win again.  Just when trees should be at their barest, lustrous evergreen branches are brought indoors and enhanced with lights and glitter.  And just at a time (especially in the ancient world) when darkness was a cover for thieves in the night coming to burgle homes, in our modern recasting of the story, a genial old boy squeezes himself down the chimney and leaves gifts.

Everything started to turn upside down from that first Christmas.  Those who were least got the best places – the ox and the ass beside the manger and Kings asking directions from shepherds.  Perhaps, the greatest revolution of all: the Virgin conceives and gives birth to a Child.  The wonder of all this ‘topsy-turvydom’ is summed up in the words of the beautiful ancient hymn, sometimes sung at Midnight on Christmas Eve, “O magnum mysterium”!

O great mystery,
and wonderful sacrament,
that animals should see the newborn Lord,
lying in a manger!
Blessed is the virgin whose womb
was worthy to bear
the Lord, Jesus Christ.
Alleluia!

There is to a degree a natural instinct in us to try to turn the world back on its feet again, because God’s coming into His own creation knocks us badly off balance.  So we tie ourselves ever more tightly into the world of “getting and spending” and have communion in consumption.  But we can’t shake off the feeling that there is a fragility about our indulgence; that somewhere there is a frail seam that will give way; a nagging feeling that there will come a day when there won’t be more tomorrow.

At this time of the year, perhaps, it is the very lavishness of Christmas that gives us a heightened consciousness of (and a bad conscience about) the “little ones” mentioned so often in the Gospels: the homeless, the poor, the rejected, and all those who long to see the world turned upside down again, when “the earth shall be full of the knowledge of the Lord, as the waters fill the sea”.

At present there are many people who have had not just the two worst Christmases ever, but two of the worst years ever – those whose bodies have been overwhelmed, or whose minds have been scrambled by Covid-19; those who’ve had bereavements during the pandemic, whose plans have been cancelled, families separated, visits curtailed, operations postponed, businesses and livelihoods upturned.

If the Spirit is saying anything to the Churches this Christmas, might it not be to think about how we, as individuals, but also as a society, can enter prayerfully and hopefully into that great mystery of the “Word made flesh”, and hold on to more of the upside down world embodied in the Gospel narratives?

Happy Christmas and may God bless you and your families.