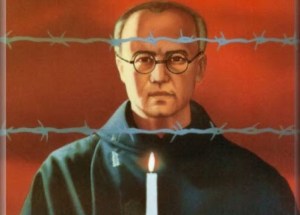 To commemorate the 80th anniversary of the death of martyr Saint Maximilian Kolbe – who as a priest gave his life in place of a father facing execution in the Nazi death camp of Auschwitz-Birkenau in Poland – Archbishop Eamon Martin celebrated Mass in Saint Peter’s Church, Warrenpoint, Co Down, Diocese of Dromore, on Sunday 5 September.

Following the Mass a special event was organised by the Belfast-based Consulate General of the Republic of Poland, the Polish Honorary Consulate and Newry & Mourne Polish Community Group. Archbishop Eamon unveiled a memorial plaque to Saint Maximilian in the Garden of Mercy adjoining the church, inscribed with these words:

‘This plaque was unveiled to commemorate the 80th anniversary of martyrdom of Saint Maximilian Kolbe, Catholic priest and Franciscan Friar, who volunteered to sacrifice his life in order to save another person’s life, by the Most Rev Eamon Martin, Archbishop of Armagh and Primate of All Ireland with the Very Rev Father Brendan Kearns Parish Priest, and the faithful people of the Parish of Saint Peter’s, Clonallon, as well as the Polish community of Warrenpoint and Newry – Warrenpoint 5th September 2021’

After the unveiling, Archbishop Eamon walked with the holy relic of Saint Maximilian Kolbe along the beautiful promenade of Warrenpoint offering blessings to the parish community and to those who live and work by the harbour. A photographic exhibition then took place in the Whistletown Hotel which involved speakers: Mr Jerome Mullen, Honorary Polish Consul; SDLP Councillor Karen McDevitt; Consul General Pawel Majewski; and an address by Archbishop Eamon. A presentation on the saint was made by Krzysztof Kunet, International Relations Coordinator and Editor of EWTN, and this included a short film on his life. Archbishop Eamon was also interviewed by EWTN. The musical performance concluding the event, with Gerry Doherty and Niamh Corless, was by Polish composers Frédéric Chopin and Henryk Górecki.

“He was one of almost 500 priests, monks, nuns and seminarians who were sent to Auschwitz, the notorious concentration camp where four million people were so cruelly put to the death.

“They took away his name and, as with all his fellow prisoners, they did their best to remove his identity, to steal his human dignity and his self-esteem; but Father Maximilian knew that deep down he and all his fellow prisoners could never lose their dignity as children of God, and he would always have his calling to priesthood – for he was ‘a priest for ever’ – who, despite the torture and cruelty around him, could continue to serve, and could remain a strong and steadfast witness to the faith.”

Archbishop Eamon continued, “What mattered to Father Maximilian was not number they tattooed on his arm, but the indelible spiritual mark of priesthood imprinted on the day of his ordination.

“The concentration camp could now be his new parish; the prisoners, his flock to shepherd. He heard confessions and celebrated Mass in secret; he continually offered prayers and words of priestly encouragement to everyone he met; he shared the meagre food he was given, always witnessing as ‘alter Christus’ – “another Christ”. Like Jesus, he prayed for the torturers who beat him and he urged his fellow prisoners to try to find forgiveness in their hearts for those who persecuted them. Blessed are the peacemakers!

“But his greatest act of witness and love was the day he stepped forward to offer his life in exchange for that of a fellow inmate, Franciszek Gajowniczek. He was one of ten men in the camp who had been condemned to death, randomly selected because someone had tried to escape. But he was a family man, a husband and father, so Father Maximilian offered to take his place and with the others was thrown into a bunker and left to starve to death. In the end he was executed by lethal injection – 80 years ago on 14 August 1941.

“On the day of Father Maximilian’s canonisation in 1982, Pope John Paul II echoed the words of Pope Paul VI, describing Father Maximilian as a ‘martyr of love’, and quoting the words of Jesus from the Gospel of Saint John: ‘Greater love has no man than this, that a man lay down his life for his friends’ (John 15:13).

“In the midst of that camp of death, where ears were shut to the cries of the innocent, where eyes were blind to the dignity of humanity, where tongues failed to speak truth to power for the sake of those unjustly condemned, Father Maximilian’s courage and serenity and unconditional service shone out. His was a triumphant testimony to the dignity of every human life, victory of love over hate, of faith and hope over despair, of life over death. His priestly witness continues to speak powerfully to the world and to us, gathered here eighty years later.

“Saint Maximilian died as he had lived. He had always witnessed fearlessly to the love and truth of the Gospel. As a young friar he had founded the Knights of the Immaculate, a Catholic movement for evangelisation and good works. Later he established a monthly periodical, ‘Knight of the Immaculata’, sending it out in different languages from his newly founded monastery outside Warsaw which became a hub of international Catholic media and communications. Father Maximilian’s ministry is an inspiration to all working in Catholic media and evangelisation. Of course there was no internet in those days but he promoted the use of every means possible, the printing press, radio, television, movies to spread the good news and confront the secular and anti- religious propaganda of his day. In the 1930s he led missions to China, India and Japan – placing all of his endeavours under the mantle of Mary, our Blessed Mother.

“The Gospel today recounts the story of Jesus healing the man whose ears were deaf, and whose speech was mute. Ephphatha Jesus exclaims, ‘Be opened’. He touches the man’s ears and lips so that he can hear and speak freely.

“It is interesting that Mark in the Gospel has preserved for us the very word that Jesus used: Ephphatha- be opened! And that Aramaic word continues to speak to us today and to country and our world where many ears, eyes, lips remain closed from hearing, seeing, speaking Gods love. And many hearts!!

“Father Maximilian’s world of 1941 was filled with spiritual deafness, blindness, and inability to speak out. Sadly too many people during the Holocaust were unwilling to hear, to see or to speak out about the evil and exploitation, the hatred, bigotry and horrors of their day. Saint Maximilian showed us that even in the most dark, horrific places a heart that is truly open to receiving and giving the love of God can transform everything and everyone around it, and its light can dispel the night-time of fear, cruelty and evil.”

Concluding his homily Archbishop Eamon said, “There is a beautiful moment in our baptism ceremony when the priest touches the ears and mouth of the child – yesterday I had the honour of baptising my little grandniece Leanna. I touched her tiny ears and lips while saying the Ephphatha prayer:

The Lord Jesus made the deaf hear and the dumb speak.

May he soon touch your ears to receive his word and your mouths to proclaim his truth, to the glory of God the Father.

“That prayer was said at all our baptisms – and our vocation is to put it into action, as Father Maximilian did – to be open to hearing and speaking Gods love and truth every day of our lives. Sometimes our ears, lips, eyes and, yes, even our hearts are closed to the word of God because of sin, selfishness, fear which can threaten to take away our identity and our calling as children of God . Sometimes we too need to hear that healing word Ephphatha- Be opened!

“Today my dear brothers and sisters may Saint Maximilian Maria Kolbe inspire you to allow God’s Spirit to flow into and from your heart, to touch your ears to hear his word, your mouth to proclaim his truth, so that our world is filled with the joy and love that believing in Christ brings.

“Think also, as Saint Maximilian did, of Mary, our Blessed Mother. Her heart, her life were always so completely open to the Spirit and to God’s will – the praise of God was on her lips, forever proclaiming the greatness of God. May she free you from anything that is closing you in on yourself and stopping you from becoming the person that God wants you to be. Amen.”