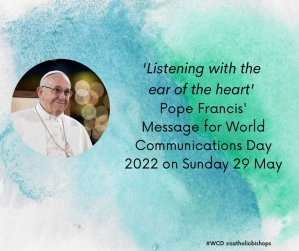 Archbishop Eamon Martin has welcomed this year’s World Communications Day message which has just been published by Pope Francis.  Archbishop Martin said, “I warmly welcome Pope Francis’ 2022 World Communications Day message, which emphasises the importance of listening. This year’s message, Listening with the ear of the heart, is an invitation to reflect on how listening involves more than simply the sense of hearing.  True listening is a foundation of genuine relationships, and is foundational to the relationship between God and humanity.

“In his message Pope Francis notes that many people ‘are quickly losing the ability to listen to one another, while at the same time listening is undergoing new developments, especially due to new forms of communicating.’

“It is also timely that the Holy Father highlights the importance of listening in the context of the Synodal Process, which the Church is currently engaged in at a local and universal level.  In his message Pope Francis says,

‘The most important task in pastoral activity is the ‘apostolate of the ear’ – to listen before speaking, as the Apostle James exhorts, ‘Let every man be quick to hear, slow to speak’ (1:19).  Freely giving some of our own time to listen to people is the first act of charity.

‘A synodal process has just been launched. Let us pray that it will be a great opportunity to listen to one another. Communion, in fact, is not the result of strategies and programmes, but is built in mutual listening between brothers and sisters.

‘With the awareness that we participate in a communion that precedes and includes us, we can rediscover a symphonic Church, in which each person is able to sing with his or her own voice, welcoming the voices of others as a gift to manifest the harmony of the whole that the Holy Spirit composes.’

Archbishop Martin concluded, “Following on from Pope Francis’ 2021 theme, Come and See – Communicating by Encountering People Where and as They Are, I invite people across Ireland to read, reflect and listen to the Holy Father’s words, especially as we go forward together on our Synodal journey.”

Archbishop Eamon Martin is Archbishop of Armagh and chair of the Council for Communications of the Irish Catholic Bishops’ Conference.

Whilst the text of the World Communications Day message is published each year on 24 January, the Feast of Saint Francis de Sales, the patron saint of journalists and editors, WCD is celebrated annually on the Solemnity of the Ascension of the Lord, which in 2020 falls on Sunday 29 May.