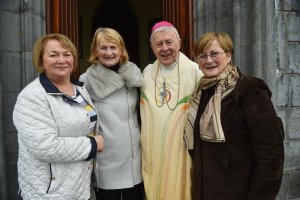 Archbishop Eamon Martin has led tributes to Archbishop Michael Neary following the announcement today of his retirement as Archbishop of Tuam. Archbsihop Neary will be succeeded by Archbishop-elect Francis Duffy, Bishop of Ardagh and Clonmacnoise.

“In his homily of last Saturday, as part of a Triduum of prayer to Saint Joseph, Archbishop Michael described the Patron of the Church as “a man of faith, strong, silent, patient and prudent … [who] placed himself at the service of the entire plan of salvation”.  This description could easily be ascribed to Archbishop Michael, whose leadership in ministry has been nourished by prayer and a deep devotion to the Gospel, a natural humility, kindness of spirit and decisiveness.”

Archbishop Martin continued, “Archbishop Michael’s interventions in the Bishops’ Conference were characterised by a scriptural and theological depth, and were highly valued in his roles as chair of the Council for Doctrine and of the Theological Committee.  He was a long-standing member of the Standing Committee and of the Commission for Catholic Education.  Archbishop Michael’s ability was recognised by the Holy See through appointments to the Vox Clara and Sapienti committees, advising the Congregation for Divine Worship and Discipline of the Sacraments on English translations of liturgical texts.

“I would like to pay tribute to Archbishop Michael’s dedication to our emigrant population abroad.  As chair of the Bishops’ Council for Emigrants he travelled to England and met with Irish people living on the margins: the poor, the dispossessed and prisoners.  He often highlighted their plight publicly.  Regionally, Archbishop Michael worked alongside his brother bishops in the west of Ireland to support the operation of the Developing The West Together, including serving on its board, helping to progress the social and economic development of Sligo, Mayo, Roscommon, and Galway.

“Archbishop Michael has always been sensitive to popular devotion and to the fostering of the Irish language and our native traditions of prayer and pilgrimage.  In August 2018, as custodian of the national Marian Shrine at Knock, Archbishop Michael hosted Pope Francis during his successful visit to the World Meeting of Families in Ireland.  Owing to the commitment of Archbishop Michael, to the delight of pilgrims throughout the country, in March of this year Knock Shrine received official Vatican recognition as an International Eucharistic and Marian Shrine.  Equally, in partnership with the local community of Westport and with the civic authorities, Archbishop Michael has secured the popularity and sustainability of the holy mountain of Croagh Patrick for use by pilgrims for generations to come.

“I pray that through the intercession of Our Lady of Knock, Saint Patrick, and all the saints of Tuam, his retirement will be a time of good health, blessing and happiness. Míle buíochas as ucht a chuid oibre agus rath Dé air anois agus i gcónaí.”

Speaking this morning in the Cathedral of the Assumption of the Blessed Virgin Mary, Tuam, Archbishop-elect Francis Duffy said, “I thank Archbishop Michael for his very warm welcome.  I follow in the footsteps of a true shepherd who has led this diocese with great wisdom, sensitivity, and faithfulness for 27 years as Archbishop.”

Bishop Kevin Doran of Elphin said, “I have known Archbishop Michael Neary for many years.  He is a wise and much-loved pastor, very deeply rooted in the Scriptures.  Since I came to the West as a new bishop in 2014, I have found him most supportive and encouraging.  He has facilitated an excellent working relationship among the Bishops of the Province. I take this opportunity to wish him every blessing and good health in his retirement.”

Others took to social media to offer their good wishes to Archbishop Neary. Bishop Fintan Monahan of Killaloe tweeted: “Every good wish & blessing to Archbishop Michael from all @KillaloeDiocese as he retires as Archbishop of @tuamarchdiocese”

On the Clonfert Diocesan Twitter the following tribute was made: “Today, we pay tribute to Archbishop Michael Neary for his wise leadership over the years and for his personal kindness and support as metropolitan. Please God Archbishop Michael you will now have the opportunity to savour life at a slower pace. Ad Multos Annos!”

Bishop Denis Nulty of Kildare and Leighlin offered his prayers and good wishes to Archbishop Neary.

The Catholic Grandparents Association tweeted: “As his retirement is announced today, we pay tribute to our beloved Patron Archbishop Michael Neary for his wise counsel and support over the years. May God Bless him always and keep him safe. We owe him a huge debt for all he has done for Grandparents. Ad Multos Annos!”

Photo: Archbishop Michael Neary is pictured with his sisters after today’s announcement in Tuam.