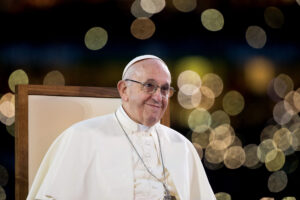 Pope Francis has accepted and approved a request from the Archdiocese of Quito in Ecuador to designate it as the venue of the 53rd International Eucharistic Congress.

A statement released by the Pontifical Committee for International Eucharistic Congresses said the event “will be held in the year 2024, on the occasion of the 150th anniversary of the consecration of that noble country to the Sacred Heart of Jesus.”

“This great ecclesial gathering will manifest the fruitfulness of the Eucharist for evangelization and the renewal of faith in the Latin American continent,” the Committee added.

Preparations in Budapest for 2021 Congress

The statement went on to note that in the meantime, preparations continue for the next International Eucharistic Congress, scheduled to take place in Hungary’s capital, Budapest, from 2 to 5 September 2021.

Speaking to journalists on board the papal flight bringing him back to Rome after his Apostolic Visit to Iraq from 5 to 8 March, Pope Francis announced his intention to travel to Budapest on 5 September to participate in that Eucharistic Congress’ closing Mass.

The International Eucharistic Congress took place in Ireland in 2012.